Join us tomorrow after the game for a beer

Share All sharing options for: Join us tomorrow after the game for a beer

Hello from the Nathan Hale Inn in lovely Storrs. I've arrived here safe and sound, Meacham is on his way and I've taken possession of a lovely Volvo S60 for the weekend. For those who haven't been following along: We're teaming up with Volvo this season -- they've sent us to Storrs to check out the sites and drop in on tomorrow's UConn game. If you hit the previous link you can vote for me to be the "The Biggest Fan of the Big East," if I win I get a car and UConn gets $10,000 in scholarship money, so vote early and vote often.

Tomorrow Meacham and I will be in Hartford to watch the men take on Tennessee, which should be a fun time. Also a fun time? The first ever official UConnBlog event held in real life. As someone on twitter pointed out to me earlier, Coach's isn't closed, it just shut down for a while and switched locations. So, after the game (and maybe before it as well if we get there early enough -- check twitter for updates), Meacham and I will hunker down in the bar. Here's the pertinent info. Come join us for a drink and if you're one of the first five readers to find me, I'll buy you a beer. I'll look something like this, though with less yelling and a jacket: 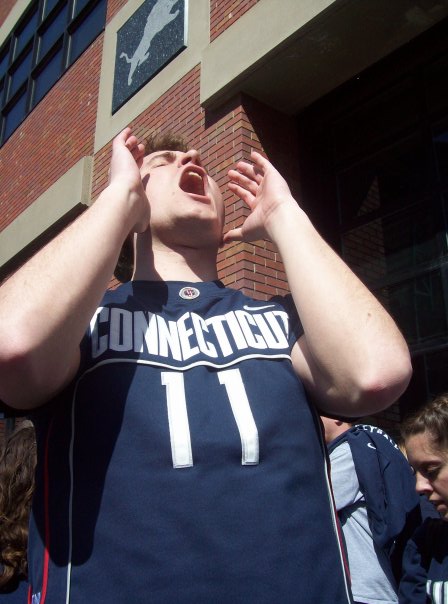 See you there folks.