First of all, I want to emphasize the very first word of my headline. I am absolutely an amateur when it comes to football X's and O's. I've watched and read about enough football that I sort of know what I'm talking about, but I freely welcome smarter football fans calling me an idiot in the comments.

Second of all, I want to thank MGoBlog for the invaluable service of posting videos of every snap of last Saturday's game on YouTube (I presume he does this for every Michigan game.) I love watching film, seeing plays develop and seeing what works, but I get so few chances to do so like this. The video embedded above was really a treat. I would love it if some UConn fan with video editing technology and free time could do this every week.

Now then, onto the actual substance:

You are Joe Moorehead. You've had eight months to figure out a gameplan, a way to carry over the offensive success of 2009 into Michigan Stadium and beat down the Wolverines' reputedly soft defense. You want to come out swinging, show the Wolverines you mean business. Obviously, your first play will set the tone for the game and, perhaps hopefully, the season.

What do you come up with?

Well, we have our answer. Let's analyze this shizz. Watch the play above...you can't miss it, it's the very first play, then head below the jump.

Here's how they line up pre-snap: 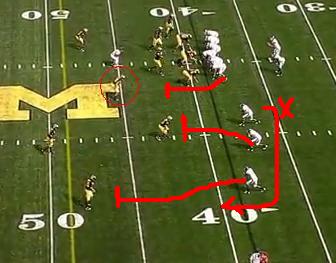 In case you didn't remember, this play is going to be a WR screen to slot receiver Kashif Moore. Moore will take a couple steps back and catch the ball at the red X. There's no tight end to the play side, so UConn's left tackle, Adam Masters, is meant to block that roving LB (Craig Roh, circled). The outside receiver will bring his defender downfield to give Moore space, and the middle receiver will need to seal off his CB and give Moore a chance to get wide and grab a few yards.

Immediately, I see something very wrong, though. There are four Michigan defenders in the area of where the play wants to go. Because Moore has to worry about catching and running, there are only the two receivers out wide to block for him. Masters makes it 3-on-4, theoretically, if he can get to Roh. (Spoiler alert: he can't.)

This is a quick developing play, but it's obvious from the snap forward that a screen is taking place. Zach Frazer gives a half-hearted play-action fake which fools nobody, and which means it doesn't take long for the defense to read screen.

OK, you're thinking. Maybe it's not the greatest play design in the world, but it's just a simple quick-hitter, and at least Moore should be able to get a couple yards before he's brought down.

Shut up, I tell you. Here's where the defense moves in the 0.5 seconds between Frazer catching the snap and Frazer getting set to release: 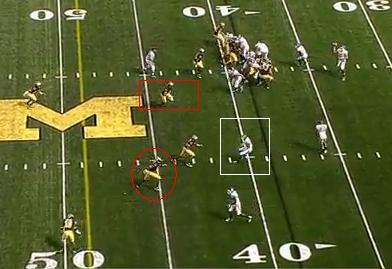 It's difficult to tell because these are stills, but Roh (in the red square) has already taken two steps running towards the line of scrimmage. He made a good read to see Moore come back toward Frazer to catch the screen, and with that huge lane between Masters and the middle WR, Roh has a perfect angle to both 1) avoid the block of the charging Masters and 2) blow the play to hell. He does both.

The better read is done by Michigan's safety, Cameron Gordon (circled). In the first photo, Gordon lines up about 11 yards off the ball, but he sniffs out the screen right away. Before Frazer's released the ball, he's already making a beeline for Moore. UConn's middle WR (in the white square) is in a bad situation from the get-go, because he has to block the cornerback in front of him and let Gordon go unblocked.

The only way this play can possibly work is if Gordon is caught not paying attention in the defensive backfield; once he reads screen, he cuts off Moore's outside lane, and Roh is coming in to take away the inside, blowing the play all the way to the aforementioned hell.

Oh, and the WR in the white square puts a terrible block on his defender, so it's actually 3-on-Kashif about 1 second after Moore catches the pass:

Gordon is the player closest to the ball; Roh is ready to make the tackle after Moore's eventual cut back inside, and he does. Perfectly defended by Michigan, it's a loss of three yards, and really just a beautiful way to start off in front of 100,000 opposing fans.

To recap: Moorehead puts his blockers in a 3-on-4 situation from the get-go. In the BEST-CASE scenario, where everyone blocks perfectly and Gordon is just kinda chillin' 10 yards off the line of scrimmage, Moore can pick up a few yards before running into Gordon or the other safety cheating over.

I'm not going to kill Morehead over one play, obviously, and it did take a great play from Gordon to shut it down. Besides, by virtue of 2009 alone, Moorehead is already easily the best UConn offensive coordinator ever. There were some other puzzling playcalls Saturday, but the offense moved the ball (when they weren't shooting themselves in the foot), so it's all good. I can't fault the OC (don't call him that) for trying to pick up a modest gain on the first play from scrimmage, even if this play seemed unlikely to succeed.

This particular play just felt like a typically conservative, too-cute-for-its-own-good UConn playcall. It stood out to me live, and as it was of course the first play on the YouTube video, the cavalcade of failure drew my eye. It amused me that after eight months of preparation, this is what UConn came up with on the opening play of the Huskies' most-anticipated game ever.

Anyway, that's the end of this amateur film session. I'm Merrill Hoge. On to Texas Southern.