The time is now: a brief UConn at Michigan preview

Share All sharing options for: The time is now: a brief UConn at Michigan preview 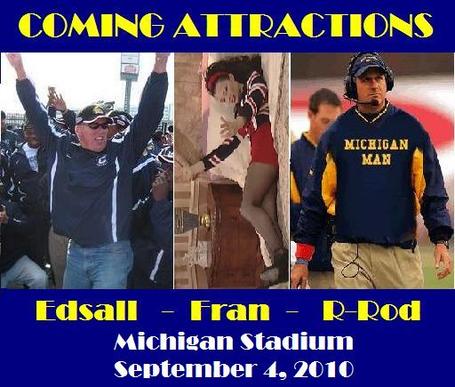 Status report: the sun is shining, the weather is a little bit cooler, and Randy Edsall and his charges are in Ann Arbor.

It is a beautiful morning.

We have been banging the "UConn-as-BCS-Contender" drum roughly since Thanksgiving, and today, finally, is the day when they begin to prove us right or hilariously, hilariously wrong.

Optimism is at an all-time high in Huskyland, which makes today a Great Moment of Opportunity for UConn football. Beating Michigan, even a Michigan program that is 8-16 in its last two years, could go a long way toward validating the program in the eyes of the college football world. And since this is a sport that decides its champions by the same method we determine figure skating Olympic medalists, that means a great deal.

Having conquered Notre Dame and ended 2009 on a five-game winning streak, the Huskies are suddenly a chic pick to have a big year in 2010. A win on the road, on national television, against a brand-name opponent - even one who has struggled recently - will send us fans, frankly, through the goddamn roof.

I don't think it is hyperbole to say that this is about as high as the stakes have ever been for the fledgling, 10-year-old UConn football program, and it's clearly the second-most important game in school history. Hopefully, by December, that latter statement will no longer be true.

Of course, Michigan fans have their own reasons to be desperate. They've seen their proud program drop off the map in the last two seasons. They need a statement win to validate their coach and to ensure that the Wolverines end 2010 in a better place than it ended 2009. They need to have a happy ending for their first game in refurbished Michigan Stadium.

There are a ton of other factors which make this game, I think, the most interesting game not involving a ranked team this season:

I shouldn't have to explain more. You should be pumped. Let's preview this thing, below the jump.

Elsewhere on SBNation: Check out the fine Maize 'N Brew for all your Michigan needs. Their game preview is right here.

The Vegas favorite: Michigan, by 3.5

State of the Huskies: Undefeated. This is the most talented opening day lineup UConn has ever produced. With sixteen starters back, including the entire offensive line, the quarterback, the running back, and three linebackers, I don't need to tell you that UConn is dreaming big.

I'm still a little skeptical until I see some brutalizing on the field, as I noted in my podcast appearance earlier this week. I'm just not certain that 8-5 (even with all the close losses and the off-the-field tragedy) can turn into 11-2 or 12-1 without some serious improvement. I'm looking at you, defensive backs.

UConn's numbers can be mitigated somewhat by the midseason murder of Jasper Howard, but the Huskies will have had eight months to get its defensive backfield ready.

The Wolverines are switching to a new look on defense, Rodriguez's favored 3-3-5 from his days in Morgantown. Time will tell - and Rich Rod's job will depend - on its success. But the Wolverines are still very young across the board on defense, with five freshmen and sophomores topping the depth chart. An injury to senior star cornerback Troy Woolfolk isn't helping Michigan any here. Also not helping: Michigan's defensive coordinator is perennial UConn whipping boy Greg Robinson, who you may remember from his disastrous head-coaching stint at Onondoga Clown College.

Wolverine fans have big hopes for Denard Robinson, a great athlete in the Pat White mold. He saw limited action behind Tate Forcier, but Robinson completed just 45 percent of his passes (14-for-31) and had a TD:INT ratio of 2:4. Small sample size. Of course, Robinson is Michigan's returning leading rusher, so it may not matter if he can't throw the ball. His speed will be an enormous problem for UConn's defense.

Despite all the doom and gloom, Michigan did begin last year 5-2 and climbed into the top 25 for a brief period. With one notable exception, they usually open the season very strong, including a near-upset of BCS-bound Utah to open 2008.

Check out the game notes: UConn's are here, while Michigan’s are here.

I think all UConn fans want this game in the worst way. But of course, that doesn't mean much. Michigan fans want it, too.

Here's what does matter: both teams should score in bunches, and I doubt any lead will be safe.

Jordan Todman should have running room all day, which should set up Zach Frazer. If Frazer can tear up Michigan's depleted secondary like he did UConn's (in the spring game), UConn will be set. On the other hand, Robinson has the potential to run wild on UConn, and while I don't necessarily think anyone will compare Michigan's running game to Nebraska circa 1995, I'm not sold on UConn's defensive front four.

But as always on opening day, I stay optimistic until I have reason to become a miserable, cynical bastard. UConn wins, and the Big Ten can stuff it.