From hope to hopeless in eight plays

Share All sharing options for: From hope to hopeless in eight plays

In case you haven't heard, yesterday did not go well. Mercifully, I had family in town so I was only able to catch bits and pieces of the game, and I didn't have to feel the full, searing pain of the loss. I did however have the misfortune to take in an absolutely brutal eight-play, 2:14-long gut punch of a drive, that was as bad as any I have seen as a UConn fan. If you will, join me as I recount this drive -- but beware, this is not for the weak of heart.

Let me set the scene. Temple has just punched the ball into the end zone after Delano Green's back-breaking 46-yard punt return. The Owls lead 27-16 and Robbie Frey returned the kickoff a modest 11 yards to UConn's 22. There are 5:48 remaining in the fourth quarter. Down 11, UConn still is in the game, but they need to score on this possession. As a sidenote, some of this agony is going to be illustrated, so  let me get this out of the way right now. My internet connection is terrible, so at best ESPN3 looks like a bunch of fuzzy lego men running around, so the pictures won't be as clear as I'd like.

Oh man, there is promise here. I can feel it. This is the moment that UConn will unleash its passing game and showcase the Huskies superior talent. The Huskies are going to drive down the field, score, and deliver a crippling blow to Temple's collective psyche. And look, I was right, as quarterback Zach Frazer looks to pass, receiver Michael Smith zips into the middle of the field. He is wide open as Frazer begins his motion, but then this happens: 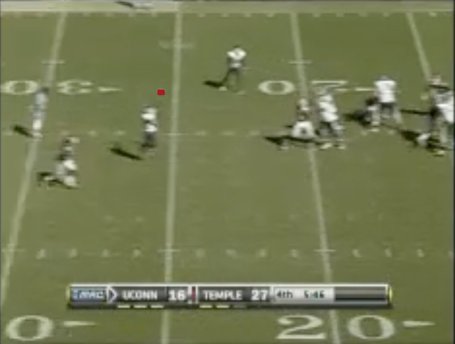 That red dot is the football as it flies several feet over the head of Smith. As you can see, Smith is wide open. Sure, he'll probably get brought down quickly, but he's got a good five or six yard pickup, and if he breaks the initial tackle, an easy first down. But we'll never know because again, ZACH FRAZER THREW THE BALL OVER THE HEAD OF A WIDE OPEN MAN STANDING 10 YARDS AWAY FROM HIM.

Alright, I think; no problem. Those were just a few jitters on Frazer's part. There is a reason you get more than one down. Smith was still open, so it's not like their corners are beating us. We just need to regroup. And what's this? Another crossing pattern? Nice, we know what works. And would you look at that, Kashif Moore is wide open, even moreso than Smith was! Yes, yes, a thousand times yes! Plus, he is in virtually the same spot Smith was, so surely Frazer knows just how much arm to put behind the ball. And yet: 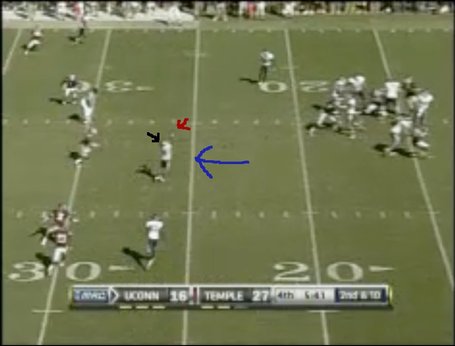 The blue arrow in that picture is pointing at Moore. The black arrow indicates his head, otherwise known as the top of his body. The red? That is pointing to his arms, extended above his head, desperately reaching for the ball, ZACH FRAZER THREW THE BALL OVER THE HEAD OF A WIDE OPEN MAN STANDING 10 YARDS AWAY FROM HIM, AGAIN. As it turns out, he was able to get his hands on it and knock it down. Of course, when you're crossing the middle of the field, if you don't have the ball secured right away, you're going to get hit and drop it. That is exactly what happens here. Incomplete pass, third down here we come.

Alright, this is it. It's magic time. Frazer has had plenty of time to throw, and sure those throws were off, but it's third down now and UConn is playing Temple. UConn always beats Temple in hilariously painful ways. This is going to work. Frazer drops back to throw, and after a second or two is hurried significantly. His receivers still had enough time to get down field, but Frazer was rushed and probably could have used an extra half second. Still, what's this? Isiah Moore is breaking open downfield? What luck, even with the pressure, all Frazer needs to do is get it near Moore. I think you know where this is going: 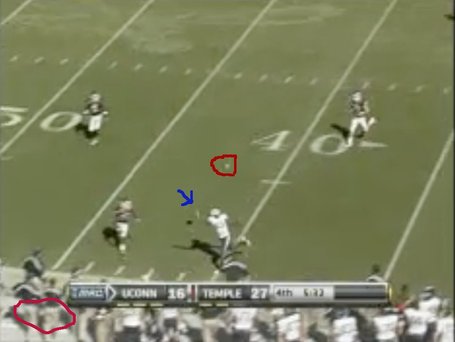 I've circled the ball in red as if flies over Isiah Moore. The blue arrow indicates his outstretched arm, as he desperately lunges at the ball. Make sure to note the amount of space around Isiah. The Temple player closing on him is reacting to the pass, so if the ball has a little less mustard on it, it easily makes it to Isiah. In case you were wondering, the maroon circle to the lower left of ESPN's scoreboard is where the ball is ultimately going to land, several yards out of bounds. Shoot me.

Goddamnit. The thousand injuries of this year I had borne the best I could, but when the season ventured upon a loss to Temple, I gave up all hope. Off goes the punt, and I have little to no doubt that Green is going to return it straight into the heart of UConn territory. But wait, what's this? Greene muffed the ball! It's loose, and UConn HAS THE BALL! Oh happy day, now I see. UConn had to go three and out so Temple could do something truly inept. Thank god, we have the ball on the Temple 30 now and the game is ours for the taking.

And look at that, a Jordan Todman sighting. Todman gets the ball on a sweep to the right. Five-yard gain! Now we're talking. Second and five, we can do that. That could work.

Todman again, inside this time. But bad luck strikes as he trips crossing the line of scrimmage. He still manages to fall forward though, so he picks up two crucial yards. Let me repeat that, because it may come up later. Since Jordan Todman is a good football player, he kept his body moving vertically down the field, toward Temple's endzone. This means that despite the fact that he tripped and got hit by a Temple lineman, he picked up some crucial yardage for the Huskies. Again, smart move.

Todman's runs were nice, but time is still a-wasting, so it's time to go back to the air. Luckily, the offense line is absolutely beastly. Frazer drops back and has four full seconds before Temple's d-line are able to make any impact at all against UConn. He's back there forever, so long that the announcers comment on the oceans of time he has. But oh no, what's this? He's squandering all that time? Let me explain: 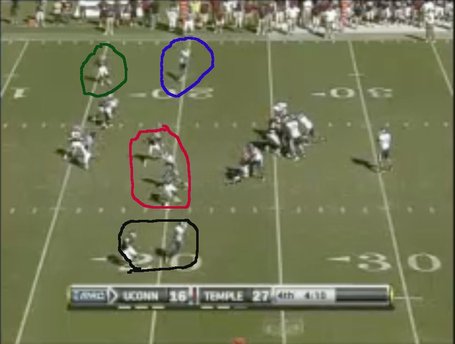 The red circle there? That's where Frazer's eyes are for almost every ounce of the unfathomably long time he has to pass. You'll notice that there is one UConn player being swarmed by two Owls defenders. There is a reason for this. Before the play, UConn lined up with its wideouts tight in on the line, I'm assuming so they would at least suggest that a run is coming. In response, all of Temple's defenders stacked into the center of the field. After eventually figuring out "Hey, maybe I shouldn't throw it where all the Temple guys are," Frazer looks to his left, to find (who I believe is) Kashif Moore, who is pretty tightly covered. Sure, Moore could cut back in, but that's not going to get UConn the first down it needs.

What does Frazer not do at any point in the UNBELIEVABLY LONG TIME HE HAS TO PASS? That's right kids, he doesn't look to his right. You know how I know this? Because if he did he would have seen Isiah Moore, circled in blue, who was WIDE OPEN next to the first down marker. Notice the Temple corner circled in green? Look at how his body is leaning back. That is because he's dropping back into a deep zone coverage, leaving Isiah even more open. Despite having an orgy of time to find Isiah Moore, Frazer holds on to the ball until the pocket finally collapses. Then this happens: 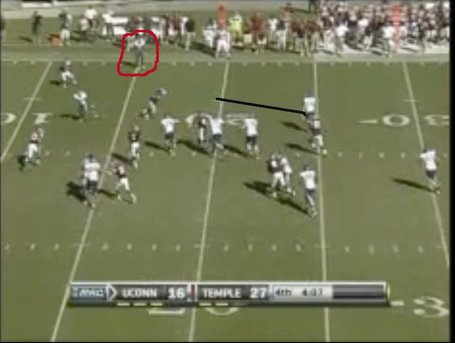 Frazer decides to tuck and run. And really, who could blame him, he only had half an hour to throw the ball. But I digress. Frazer takes off toward his right. The black line indicates the general direction he is running in. Note that at this point Isiah Moore (red circle) has somehow not only moved five yards further down field but IS EVEN MORE OPEN THAN HE WAS BEFORE, and now, Frazer has no choice but to look at him. I know getting the ball to him means Frazer has to throw on the run, but HE IS SO GODDAMN OPEN. I could make that pass running, you could too. Anyone could. Just lob the stupid thing. There is no way it wouldn't work.

But fine, Frazer's keeping the ball, I've made my peace with that. From the looks of the play, it even seems like he might get the first down. He's got a good head of steam going, and although he isn't terribly mobile, he's big enough so that if he continues on his current path he'll probably be able to fall forward when he gets hit, and maybe grab the first down. If Frazer remembers the lesson of Todman from the play before, all will be right in the world. 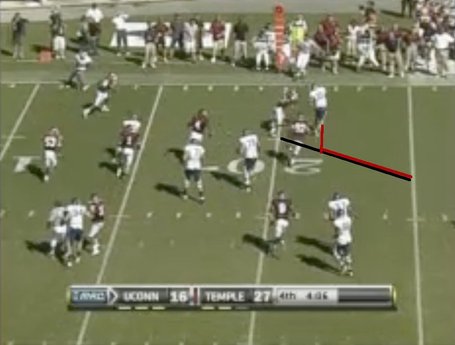 The black line once again represents Frazer's original path. The red line is what Frazer actually did. Here is a rough approximation of my reaction to that play in real time: What? Why? OH WHY GOD WHY ON EARTH WOULD YOU DO THAT? The man about to hit Frazer is Adrian Robinson Jr. He was the MAC defensive player of the year in 2009 and is very good at football. Confidential to Zach Frazer: YOU ARE NEVER GOING TO GET AROUND ADRIAN ROBINSON. Trying to is a fools errand. By turning sideways you do not avoid being hit. The only thing you avoid is success. It's not fourth and two or so. Luckily, we have Jordan Todman, who can get two yards in his sleep. I think I see him coming out onto the field now.

What? Dave Teggart is on the field? The hell? Why would you do that? UConn's going to need a touchdown at some point, and the offense has been so putrid there is no way they are putting together an 80-yard-drive three minutes from now. Why wouldn't you take this chance to punch it throw on 4th, get some momentum and maybe even a touchdown in a few plays. Plus, did anyone really feel confident in Teggart hitting this? I like him as a player, but he had already missed one field goal today and if you give me the option of Todman going for two yards or Teggart hitting a 40-yarder with a lot on the line, I'm taking Todman each and every time. Naturally, Teggart missed and Bernard Piece rushed for 78 yards during the next three plays. Oh, and UConn lost to Temple.

Apparently, well I was composing this piece, Randy Edsall announced the quarterback position would have changes on the depth chart this week. Thank god. That might just mean Cody Endres is back, but hopefully it means Cody Endres will be starting, because this team has real talent. We saw it last year and knew it at the beginning of the season, but that talent hasn't shown up on the field yet, and with Big East games starting in three weeks, it needs to.