As part of TheUConnBlog's 2010 Season Preview Month-ish, we're counting down the days to the UConn football team's opener against Michigan. Today, we examine UConn's transition from I-AA also-ran to full-fledged Big East Conference member. You can read all our Football Preview Month-ish posts here.

If you haven't read part one, do so. When we left off, UConn was struggling in the mid-80's...

Tom Jackson - not Chris Berman's straight man on NFL Primetime - took over a moribund program in 1983. He won the Yankee Conference that year with a 4-1 record (though the team finished below 5-6 overall), but the Huskies went 2-8 combined in the league in 1984 and 1985.

On the plus side, UConn began to dominate Yale; the Huskies won 14 of the final 16 meetings between the two teams before the series was discontinued after the 1998 season.

And in the latter half of the decade, quarterback Matt DeGennaro set all kinds of school records; he was the all-time UConn leader in total offense, passing attempts, passing yards and touchdown passes until he was eclipsed by Dan Orlovsky. Behind DeGennaro and receiver Mark Didio (a then-school-record 1153 receiving yards in 1990), UConn put together five winning seasons in a row (1986-90) for the first time since 1956-60.

The first half of UConn's final decade as a Division I-AA saw the end of the Tom Jackson years. Jackson coached 11 years and won 62 games - third on the school's all-time list - but was let go after the 1993 season.

Jackson's second-to-last year included one of UConn's lowest moments ever: a 14-13 loss to Division II New Haven at Memorial Stadium on Sept. 5, 1992. This account by the New York Times should give you an idea of what an upset it was:

Appropriately enough, it was at the UConn game that the new University of New Haven pep band made its debut. "The band had only five pieces," a drum set, two saxophones and two flutes, "compared with the big UConn marching band," Mr. Mumbach said. "But our little pep band gave them a run for their money."

Of note: UNH's head coach, Mark Whipple, would go on to coach at UMass before ending up as the offensive coordinator at Miami (FL), where he remains today; and New Haven disbanded its football team in 2003, bringing it back five years later.

The '95 team, led by then-all time leading rusher Wilbur Gilliard (he finished with 2,624 yards, a record that would stand until Terry Caulley's senior season in 2006), started off 6-0 for the first time in 96 years. UConn's first loss came in the Ramnapping Trophy game, and they lost three of their last five games, finishing 8-3.

Apparently, that was just the trick to turn the program around. Three years later, a senior-laden squad put together the best pre-I-A season in UConn history, led by Stafford, who concluded his career second in school history (behind DeGennaro) in completions and passing yards, and tied for first in touchdowns.

His top receiving targets, Carl Bond (61 catches in '98) and John Fitzsimmons (53), are third and second in school history in receiving yards, respectively.

Stafford, incidentally, is still active - he plays for the Dallas Vigilantes of the newly-reincarnated Arena Football League.

The '98 Huskies went 10-3, averaging over 33 points per game, and defeated eventual national champion UMass twice. The second game, in Amherst on Nov. 21, saw backup safety Jamar Wilkins force future NFLer Marcel Shipp to fumble the ball in the final minutes, preserving a 28-27 UConn win. The victory catapulted UConn to the A-10 New England Division title, and its first postseason berth ever.

You could make the case that the modern era of UConn football began on Dec. 1, 1998. That was the day that South Carolina offered its vacant head coaching position to Lou Holtz. It was considered a formality that Skip would join his father as offensive coordinator.

Holtz had just won the first playoff game in school history, leading UConn to a 42-34 win at home against Hampton behind Stafford's four touchdown passes. His wife had just given birth to a baby girl. Now he had to deal with rumors of a move to the SEC school.

The pressure proved to be too much, and UConn was overwhelmed in the Division I-AA quarterfinals on Dec. 4, losing 52-30 to Georgia Southern. Adrian Peterson - not the one on the Vikings, the other one - ran for 232 yards and GSU ran for 530.

Three days after announcing the finalists, on Dec. 21, 1998, Perkins introduced the latter as UConn's 27th head coach. A former quarterback at Syracuse, Randy Edsall would be the man who would lead UConn into Division I-A football...if the upgrade ever happened. 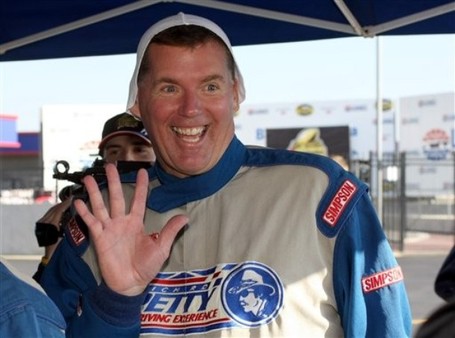 UConn went 4-7 in Edsall's first season, as the school concluded its 75-year relationship with the Yankee Conference/Atlantic-10.

The Hartford Courant's archive reveals articles about the possibility of UConn upgrading its football team from as early as 1993. The school's board of trustees actually agreed to a conditional upgrade of the football program in 1994 - assuming it could build a I-A-worthy stadium somewhere in Connecticut - and commissioned then-athletic director Lew Perkins to find a way to transition the UConn program into a full Big East schedule by 2002.

This proved to be a bit tricky. For, you see, Storrs is not quite conducive to having large amounts of people driving on its two-lane roads at one time. If you've ever been to Gampel Pavilion for a big basketball game, you know what I'm talking about. Access to the campus is limited, and in 1997 the residents of the Storrs-Mansfield area rejected any proposal of a 30,000-seat stadium on the small rural campus.

No problem, it was thought. The New England Patriots, after all, were considering a move out of Foxboro, and the Connecticut legislature ponied up millions of dollars to build an NFL-caliber stadium in downtown Hartford. This new stadium, like the Civic Center did for UConn basketball in the 80's, would give UConn's football program a home and a good amount of credibility.

This too, proved to be just a dream. On April 30, 1999, Patriots owner Robert Kraft said that the deal with Hartford was off. He ended up getting beautiful Gillette Stadium out of the deal; UConn was SOL.

Perkins continued to look for any way to bring a I-A-caliber stadium to Connecticut - he "spent most of this decade chasing football stadiums the way Don Quixote chased windmills," said the Courant. Finally, there was a breakthrough. On Nov. 11, 1999, then-Gov. John Rowland announced plans to build an open-air, 40,000-seat football stadium on the Pratt & Whitney airfield in East Hartford, thanks to a 75-acre donation by United Technologies Corp.

With the final roadblock out of the way, UConn's acceptance into the Big East for football became a matter of time. Five days after the Rentschler Field plans became official, Perkins notified the Atlantic 10 that UConn would withdraw its membership following the 1999 season.

Construction at Rentschler began in October 2000, a month after UConn had played its first game as a Division I-A team. The stadium would open on Aug. 30, 2003 against Rutgers. UConn would join the Big East as a full member in 2005.

True, neither of those last two sentences ended up being true. But after 104 years of waiting, UConn was ready to make a leap into the big time.

Theoretically, anyway. More on that Thursday, when we review UConn's 2000 season.