FPM: A brief history of UConn football, the I-AA years (part one)

Share All sharing options for: FPM: A brief history of UConn football, the I-AA years (part one)

As part of TheUConnBlog's 2010 Season Preview Month-ish, we're counting down the days to the UConn football team's opener against Michigan. Today, we examine UConn's humble origins as a regional I-AA program. You can read all our Football Preview Month-ish posts here.

There's nothing more exhilarating in sports than watching a team grow from nothing to something. If you're lucky, you get to experience such a dramatic rise once in a lifetime.

UConn fans, of course, have been blessed in this regard. The exploits of Jim Calhoun and Geno Auriemma have been well-chronicled, and many a book has been written about their will to succeed. Calhoun took a perennial also-ran and turned it into a national title contender within five years; within 15, he was cutting down the nets himself. Auriemma took just under a decade to turn his team into an unstoppable juggernaut, and has only upped the ante since them, threatening to topple John Wooden's legendary 88-game Division I win streak later this year.

Randy Edsall has taken a much more gradual route, making small strides each season. It's hard to see Edsall ever matching Calhoun or Auriemma's success - and who knows if Edsall wants to be a lifer in Storrs, anyway. And besides, it's simply not possible to become a major football power in a few seasons. In a sport in which championships are partially decided before any team plays a game, a program-building coach must have patience. Edsall has shown that and more in his 11 seasons.

Edsall is obviously the alpha and omega of UConn football: the Division I-A years, but everyone knows the general outline of his story by now. We'll get to more of the specifics of his reign as we travel year-by-year in the coming weeks.

But UConn was, for over a century, content with having a small-time football program at a basketball-dominant school, no different than Big East brethren Villanova or Georgetown.

The contrast between then and now is striking. To fully appreciate the rise of Randy Edsall - and the fact that UConn is a lock for the Orange Bowl - we must look to the past. So join me, won't you, for a brief guided tour of UConn football history below the jump.

At the time of the great transition to I-A - the school's Board of Trustees officially announced the move in November 1999, after years of debate and waffling - UConn had been playing football for over 100 years in relative anonymity. It's unfortunate that most New England schools chose to de-emphasize football, considering that the game was basically invented by a Yalie born in New Britain, Connecticut.

As a result, UConn has played Rhode Island 94 times, including a 52-10 win last year. UConn's next most common opponent is Maine (73 games), followed by UMass and New Hampshire (71 apiece). Rutgers is UConn's most common opponent among I-A schools, but the two schools have met just 29 times.

In 1919, tragedy struck the program when Gardner Dow, died on the field as a result of a nasty collision in a game against New Hampshire. The school named its football field after Dow; the field was located in the space occupied by the Co-Op (before 2003, when a new Co-Op was built across from Gampel Pavilion), the Homer Babbidge Library and the ITE Building.

The 1934 season was the first for new head coach J.O. Christian, who also coached baseball and men's basketball at different points. His name now adorns the baseball diamond in Storrs.

That year also became famous at UConn because of the ram-napping incident, about which I went into greater detail in our Rhode Island opponent capsule for last year's Football Preview Weekish. 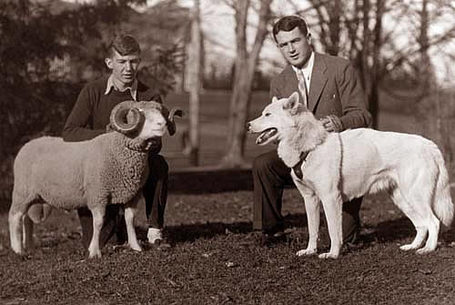 Christian was moderately successful as a head coach, winning 56 percent of his games. He retired in 1949 with 66 career wins, and remained UConn football's all-time winningest coach until January of this year, when Edsall tied him by winning the PapaJohns.com Bowl.

During World War II, UConn showed its patriotism by kicking the crap out of everyone in sight; the Huskies were 20-4 from 1942 until 1945. They were led during this period by running back Walt Trojanowski, who remains fifth all-time in UConn history in rushing touchdowns (25). It's said that Emperor Hirohito would not surrender until he was sure UConn would not invade his country and beat it soundly on the gridiron.

Trojanowski would eventually be drafted in the sixth round of the 1946 NFL Draft by the Washington Redskins, who were no doubt impressed by Trojanowski tying for the NCAA scoring title in 1945. The guy he tied? You might have heard of him: Army's Doc "Mr. Inside" Blanchard, the Heisman Trophy winner that year.

The school joined the Yankee Conference in 1947, and claimed a league co-championship two years later, when they went 2-0 in league play.

A Forgotten Run Of Dominance

UConn began to dominate the Yankee Conference in the late 50's; from 1956 to 1960, the Huskies won at least a share of the league title each year.

Standout runner Lenny King ran for 777 yards and 13 touchdowns in 1956, and UConn mopped the floor with its league opponents, outscoring Yankee Conference teams 135-19. Only a scoreless tie with New Hampshire prevented UConn from winning the title outright.

UConn went 18 straight league games without tasting defeat, from the start of the 1956 season to Oct. 9, 1960, when they fell to New Hampshire. Still, they clinched a fifth straight YC title by dominating URI, 42-6, to retain the Ramnapping Trophy.

It wasn't exactly USC and the Pac-10 in the mid-2000's, but it's about the only time in history when UConn was clearly the dominant power in its conference. The 1960 season would be the last hurrah for UConn under coach Robert Ingalls, who coached UConn to three straight sub-.500 seasons and did not return in 1963.

On Yale and Offensive Explosions

I haven't mentioned Yale enough in this piece. Not only is Yale the alma mater of such distinguished persons as Presidents Bush, Bush Jr. and Clinton, not to mention Rory Gilmore and C. Montgomery Burns, but they turned into a fierce rival for UConn in the 50s and 60s.

UConn had never defeated the Ivy League power until 1965; they did so with a miraculous 13-6 win at the Yale Bowl. UConn only defeated Yale twice more between 1965 and 1981

We enlisted Porter's father, Robert (class of 1969) to tell the story of the UConn-Yale rivalry last September: you should definitely check it out.

Robustelli was even better in 1970, when UConn won another Yankee Conference title; the Huskies won three in four years, topping out with a superb 8-2-1 record in 1973.

That would be the end of UConn being a competitive team for a while. Between 1974 and 1985, UConn finshed above .500 exactly one time.

Part two, dealing with UConn's final 15 years in I-AA and the transition to I-A, will be posted later this afternoon.