Share All sharing options for: Report: Bradley likely to redshirt 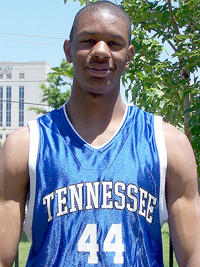 The news is a bit surprising, considering UConn currently has the maximum 13 players scheduled to be under scholarship next season now that Enosch Wolf is on board and the Dove is set to officially become a walk-on.

But it appears that Bradley, a three-star PF/C out of Chattanooga, was the odd-man out in a frontcourt that is already brimming with raw, young big men in Ater Majok, Alex Oriakhi, Chuck Okwandu, Tyler Olander and Wolf.

Which is essentially what Zagoria says in the followup article:

However, the conspiracy theorist in me can only believe this has more to do with the expected response by the university to the NCAA's allegations of eight major recruiting violations that has reportedly been in the works and set to unveil in the near future.

Initial reports presume that the Huskies would indeed lose scholarships following Nochimson-gate, with one being the consensus magic number. But any potential scholarship restrictions weren't, if I remember correctly, supposed to take effect until after the 2010-11 season.

Still, it's possible that, with expectations significantly lower for this winter thanks to that enormous freshmen class and the lack of much developed talent, the university was willing to swallow its pill a year early and grayshirt Bradley for the season. Although, given Zagoria's report that it will, in fact, be a redshirt, that seems highly unlikely... And what about the guy on the grassy knoll?

Bradley's expected redshirt could be solely a result of the numbers game. But when's the last time UConn, or any basketball program, redshirted a player for anything other than medical reasons?