Share All sharing options for: Niels Giffey commits to UConn 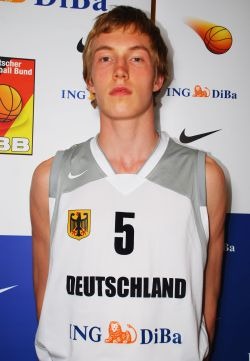 How many great people in history that you've heard of have been named Niels? I came up with one. Obviously, we all need a little more Niels in our lives.

Jim Calhoun has heard your pleas, and as such he has picked up an oral commitment from German ubersportler Niels Giffey, according to David Borges of the New Haven Register. The 6-7, 19-year-old from Berlin, who is visiting Storrs at the moment, picked UConn over Louisville, Michigan, Gonzaga and UCLA, citing UConn's great history of wing players, and specifically Ray Allen:

"I’m really excited to come to UConn," said Giffey, who speaks fluent English. "I knew that UConn has a great basketball history. Coach Calhoun is a Hall of Fame coach, they’ve had Ray Allen and plenty of great wings. I like that fact. It’s a good team, a great coaching staff. I really felt comfortable."

He may not have made made foundational contributions to understanding atomic structure and quantum mechanics, for which he received the Nobel Prize in Physics in 1922, but our Niels is obviously a very bright young man (although, do we really have a coaching "staff" at this point officially?). On the court, Giffey appears to be a pretty solid pickup.

He's 6-7, can play both guard or forward positions, and according to this scouting report (scroll down), he has a good long-range jumper and he can rebound. Seems like Giffey's got some talent - especially judging from the schools who were after him - and he'll get a chance to play right away, given the youth of the 2010-11 team.

Giffey fits into the roster following Calhoun's waiving of Darius Smith and Jamaal Trice, and barring any other moves (or NCAA sanctions), the Huskies are at their scholarship allotment now. He's the sixth member of UConn's freshman class, along with Roscoe Smith, SHABAZZ! Napier, Jeremy Lamb, Tyler Olander and Michael Bradley.

YouTube does have a Niels Giffey highlight video (from an account named Giffeynizer, which is phenomenal). Here it is: