How Geno Built A Juggernaut

Share All sharing options for: How Geno Built A Juggernaut

Geno Auriemma will walk into the Alamodome confident tonight, as well he should. His UConn women's basketball team, of course, has won 77 straight games. In fact, it's been exactly two years to the day since he last tasted defeat. One more win tonight, against a Stanford team his Huskies have already beaten (by 12 points in December), will clinch a second straight undefeated national championship. It will give UConn seven titles in 16 years, and bring Auriemma within one of Pat Summitt for the all-time women's record.

He's untouchable in Connecticut, one of the two places where there is a dedicated fanbase for women's basketball, and has been since Rebecca Lobo and Jen Rizzotti won it all in 1995. In front of the cameras, he gets to play the role of cocky overdog - which fits in perfectly with the brazen, sarcastic-Philly-tough-guy character that he has honed as a way to take the focus and pressure off his players. Behind the scenes, he gets to preach an "us against the world" mentality to inspire his team.

Life, I imagine, is good for Geno.

But life is also fickle. The UConn machine you see now, chewing up opponents and leaving swaths of destruction in their wake, is at the pinnacle of its powers now because Geno won two of the most important recruiting battles of his career. (There's a sort of unspoken assumption among UConn women's fans that any loss is intolerable. Losing more than three or four games per year is a sin. And missing out on a national title is a failure)

Tina Charles and Maya Moore are two of the five best players to ever play at UConn. But what's lost in their utter dominance over the past two years is that, before they arrived, it seemed like Geno might struggle to dominate the basketball world as he did in the first half of the last decade.

For the (long) full story, hit the jump:

One night after Emeka Okafor and Ben Gordon had clinched Jim Calhoun's second title, Auriemma and Diana Taurasi embraced at center court. UConn had won its fifth national title - its third in a row - with a 70-61 win over rival Tennessee.

The sky seemed the limit for Geno. He was one title shy of catching his archnemesis, Summitt, and even without Taurasi's greatness, it was assumed that UConn would reload, as it always did.

But something strange happened along the way.

Everything Auriemma had touched since 1995 had turned to gold. His newest superstar for the 2004-05 squad, Charde Houston, could do anything on the basketball court if she wanted to. But Geno could never quite figure out Charde, and she tormented him with inconsistency. Houston was good-to-very-good for all four years in Storrs, but she never quite dominated as everyone thought she would.

The 2004-05 squad, made up of the role players from Taurasi's last team (Ann Strother, Barbara Turner, Willinet Crockett, Jessica Moore, Ashley Battle) and a few familiar freshmen (Houston, Mel Thomas, Ketia Swanier), had no star. They became the first UConn team in years to lose to an unranked team (Arizona State), and they limped into the Big East tournament with a 20-7 record. (For perspective: Tina Charles has lost six times in her four-year career.) UConn cruised through the Big East tournament, beating Rutgers 67-51 in the final in Hartford, but the Huskies' insane streak of five consecutive Final Fours ended with a 76-59 loss to Stanford in the Sweet 16.

This was a good team that was simply not a national title contender. The Huskies were whipped by North Carolina in the Hartford Civic Center in December, lost fairly comfortably at Tennessee (who also had something of a down year in 2006) and was swept by Rutgers, giving the Scarlet Knights Big East bragging rights and giving life to a new rivalry. They needed a miracle buzzer-beating 3 from power forward Turner to beat Georgia in the Sweet 16 in essentially a home game (at Bridgeport).

Still, UConn nearly returned to the Final Four (which was in nearby Boston that year)...except that Houston missed a short, open baseline jumper at the buzzer with the Huskies trailing Duke, 63-61.

Auriemma finally broke back through on the recruiting trail in 2005, picking up a 6-3 center from national power Christ The King H.S. in New York City. Tina Charles had the look of a star in the making, and it was evident that Auriemma knew that, too.

If you've read his book, and I have, you'd know that Geno can be, well, kind of a jerk to his best players. The great ones handle it and channel Geno's pestering and challenging into dominance. The first step towards restoring UConn's dominance on the women's basketball scene was to pick up a potential All-American in the post. Auriemma tried it with Houston, and it didn't work out as he planned.

Charles, of course, has been the best center in the country for at least two seasons, and might be the most important player on the 2010 UConn team.

In 2007, though, she was just a nervous freshmen. The core of Montgomery-Greene-Houston-Thomas was very good, but in the biggest games, they didn't have that superstar who could score at will when points were needed. Charles was too young; Montgomery's shot was too erratic; Houston always seemed to have a knack for a turnover at the wrong time.

The season ended in heartbreak again, as UConn was stunned by Rutgers in the Big East title game, and Charles and Kaili McLaren were exposed by Sylvia Fowles in LSU's 73-50 Elite Eight win over UConn in Fresno. 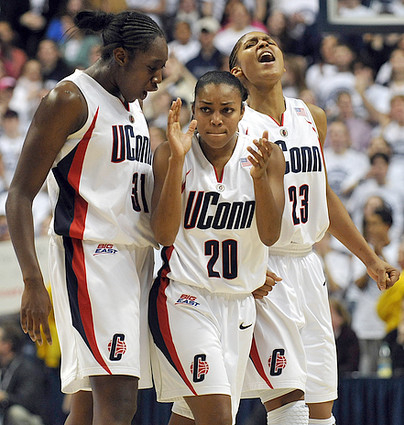 It was during this offseason that Auriemma won the second recruiting battle that earned him a couple years' peace of mind. Charles had always wanted to go to UConn; she anxiously awaited Geno's recruiting letter and did her damndest to impress Auriemma when he came to visit CTK (presumably to watch someone else).

Maya Moore was a different story.

The consensus number one player in the 2007 high school class, Moore could only ever go one of two places: Tennessee, where she could join Candace Parker and the defending national champions, or Connecticut, where she would be the superstar from day one. It was a battle that altered the fate of those two programs.

Summitt, for reasons known only to her, canceled the lucrative regular-season series between the Huskies and Lady Vols the summer after Moore committed. UConn fans say she was afraid to play Geno, because the scales had tilted decisively in his direction; Tennessee fans say she is merely holding up the honor of Tennessee against the brute from Storrs (amid rumors that Auriemma cheated to bring Moore in, rumors that so far have lead only to a harmless secondary violation accusation).

After winning the '08 national title, by the way, Tennessee is 2-2 in the NCAA Tournament, failing to get past the Sweet 16 either year.

Moore immediately became the best player on the team, the star UConn had been missing since Taurasi. She averaged nearly 18 points and 8 rebounds per game as a freshman, making the All-American team and returning the Huskies to juggernaut status.

Candice "Wiggity-Wiggity" Wiggins would be UConn's undoing, however. Stanford, behind an excellent shooting night, made its run midway through the second half to get a 10-point lead, and the Huskies had no answer. The senior class of Houston, Swanier, Brittany Hunter and injured Mel Thomas, which had "underachieved" for four years, was let down by Montgomery (4-18 from the field) and Charles (just 9 points and 6 rebounds).

The first national title-worthy team in 2004 had missed its chance. But with their top three players coming back, the Huskies appeared poised to start destroying everything in their path. 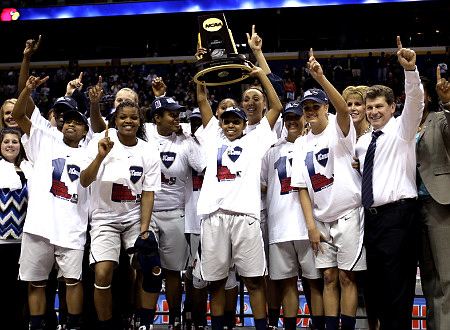 Had Delle Donne not transferred from UConn before the fall 2008 semester began (she was a third-team All-American as a freshman putting up Wilt Chamberlain-like numbers at lowly Delaware this year), the Huskies would have played two years with the consensus No. 1 players from the 2006, 2007 and 2008 classes. They would not have lost until 2012 at the earliest. The rest of the women's college basketball world is grateful.

Tiff Hayes and Caroline Doty, of course, are no slouches, as you know if you've seen any games this year.

But this was finally the year UConn dominated like UConn fans expect. Charles and Moore matured and took the pressure off of Montgomery (who is an top-12 all-time UConn player, but had a tendency to shoot her team out of the big games).

Charles finally got the message after the Stanford loss. Auriemma reportedly called her out in the locker room after that game, saying the team "didn't have a post presence." Whether it was that, or something else, everything finally clicked, and Charles was able to use her 6-4 frame, her amazing length and her outstanding athleticism to dominate the world. She averaged 16.5 points and 9 rebounds per game, making 62 percent of her shots.

With the inside under control, Moore (19.3 ppg, 9 rpg, 39.8% from 3) and Montgomery (16.5 ppg, 5 apg) were free to do their thing on the perimeter. This team could go on a 10-0 run at the drop of the hat, and I would argue that UConn's offensive ability pressured teams into tough shots. Whatever the case, UConn's opponents managed just 53 points per game and shot 33.4 percent from the field.

The Huskies, of course, cruised to the national title, beating everyone in the NCAAs by at least 19 points, redeeming Montgomery and putting the dark ages of 2004-07 firmly in the rearview mirror.

And then there's this year, which has turned more and more absurd with each 40-point blowout of a top 20 team. This is the best basketball team I have ever seen (relative to competition, obviously). UConn puts four shooters on the court at any one time, and Geno's offense is so exquisite and perfectly run at this point, that he can get any player any shot she wants at any time and any place on the court. UConn's 70-50 win over Baylor Sunday night was its closest game of the NCAA Tournament. The next closest was a tidy 40-point win in the Elite Eight.

Charles will look to go out with 78 straight wins; Moore can still angle to tie Taurasi's three titles. The freshmen and sophomores who make up 5/12ths of the roster have never lost a game.

Things will be different next year; without Charles, I expect Auriemma and UConn to fall somewhat back to earth. They will be favorites in the NCAA Tournament next year like your average #1 seed is in the men's tournament; can be beaten, but it would take a monumental effort from anyone in the first three rounds.

Which makes tonight all the more special. It would almost be unfair if Stanford can somehow pull the upset (which they can, I think). Tonight's game ought to be a coronation of the most astounding three-year period of Geno Auriemma's career, which is saying something.

You may shrug it off and say, "hey, anyone can win with the two best players in the country." Well, sure. But 1) you've got to get them to play for you and 2) you've got to mold them into a team. It's not as easy as it looks.