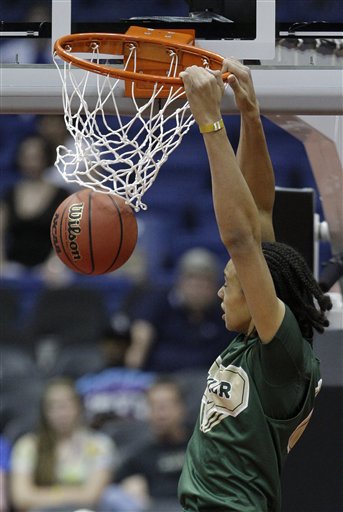 Well, I'll say this for Baylor women's basketball coach Kim Mulkey: she's in this thing to win this thing.

The Bears (27-9), fourth seed out of the Memphis Region, made it through to tonight's Final Four in San Antonio in impressive fashion, rolling top-seeded Tennessee and making a late run to knock off second-seeded Duke. Baylor has won in large part thanks to their freshman phenom center, Brittany Griner. Griner, the 6-8 dunking wunderkind who is averaging 10 blocks per game in the NCAA Tournament, is the kind of player you need to have if you want to win a national title in women's basketball. (If you were going to get in a fist fight, Griner wouldn't be that bad to have on your side, either.)

Mulkey, who won the 2005 national title as coach of Baylor, must be aware of this. This fantastic Jason Whitlock column on the Bears' Final Four run has a few choice snippets of Mulkey's motivation in practice this past week. Notables:

"They might stop the game if you dunk it on Tina Charles," Mulkey yelps. "Geno would have a conniption right there on the sideline."

This is encouraging to hear as a UConn fan. I was beginning to think the Huskies wouldn't have any motiviation, you know, after beating the #3 and #4 seeds in their region by a combined 78 points.

"What place did Georgetown come in in that league?" Mulkey roars after a string of good defensive plays by her starters. The Bears yell back, "second place!" "Where would Georgetown finish in the Big 12?" Mulkey asks rhetorically. "It damn sure wouldn't be second place. You show 'em what Big 12 basketball is all about."

My point being, man oh man do I want UConn to roll Mulkey and Griner tonight. There's a fair bit of hype surrounding this game, on the premise that Griner can be the equalizer who restores parity to the women's game. Screw that noise. I want a blowout of epic proportions. I'll settle for a comfortable win.

By way of a preview (we'll have an open thread later tonight): Tina Charles and Griner should be a very interesting battle in the post. UConn has Maya Moore, though, as well as sharpshooter Caroline Doty and future superstar Tiffany Hayes. Baylor may have a chance if they have a crazy shooting day and Charles or Moore get in foul trouble. Don't count on it. UConn wins by 20.