Share All sharing options for: Your unofficial guide to UConn-related things in the 2010 NFL draft

This year's crop of UConn NFL prospects is a little lackluster in comparison to 2009, when the Huskies had four players taken on Day 1. But while the quality may not be as high, there's certainly quantity.

None will probably be taken in the first (or probably even second) day, but UConn could have as many as six players on NFL rosters by the start of the season. (Hey, scout teams count, too.) Andre Dixon, Marcus Easley and Lindsey Witten will all likely hear their names called (eventually), and Mike Hicks, Reggie McClain and Robert Vaughn al have shots to be drafted and at least sign with teams as undrafted free agents.

In order to prepare for this weekend's incredibly long, drawn-out event, I present to you the 2010 UConn-related NFL draft primer (complete with incredibly large photos): 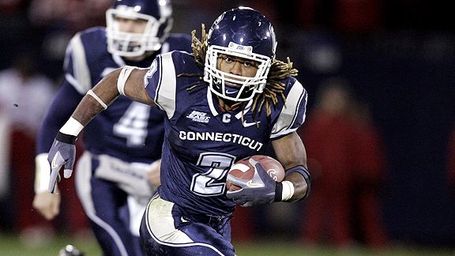 Player: Andre Dixon
Pos.: RB
Height: 6'0"
Weight: 205 lbs.
My expert opinion: Despite the whole "getting really drunk and tailgating a police car" and generally being a Gloomy Gus as a junior, Dixon bounced back last season and proved his draftedness. Although he had to share time with Jordan "WOOOOOO!" Todman, Dixon, or "Dreads" as some fans call him (because, y'know, he has dreadlocks? Yaseeyasee?), still showed the patience, vision and power/speed combination that made him an All-Big East selection as a sophomore. He'll probably never be a feature back, nor will he likely ever get a shot at being one. But when he's motivated, he can certainly be a third-stringer or special-teamer on some team's depth chart. Setting my homerism aside, I probably wouldn't take him; he's proven to be moody and he has "career scout-teamer" written all over him. But he's worth a late-round flier.
Actual experts' opinions: NFL.com

Dixon is a good-sized running back with marginal speed and acceleration through the hole. He fights for yards but needs to do a better job of running with a low pad level, especially inside. He takes too many solid shots to survive, long term, at the next level and lacks the power and bulk to run through tackles like he did in college. He will need a lot of work on pass blocking at the next level and often shows questionable ability to read blocks and anticipate holes opening up. There is enough to Dixon to make you think he may come off the board in the later rounds. 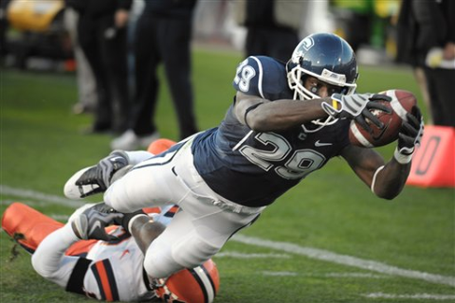 Player: Marcus EasleyPos.: WRHeight: 6'2"Weight: 210 lbs.2009 stats: 48 rec.,  893 yards, 8 TDsMy expert opinion: Until last season, Easley was a former walk-on with five receptions to his name and whose best attribute was his down-field blocking. But after getting an opportunity against Pittsburgh, Easley essentially turned into the first go-to receiver in UConn history. He made big plays, as evidenced by longs of 40 in five of the Huskies' final eight regular-season games, and topped the 100-yard mark five times. He's obviously still raw, isn't the best athlete out there and isn't a burner (despite that 4.46 at the combine). But he has great size and is great when the ball is in the air. Plus, he spent the majority of his career as a special teams ace, and can likely have a similar impact in the NFL.Actual experts' opinions: NFL.com

Easley is a very raw talent who struggled on the bench for three years before bursting on the scene during his senior year at UConn. He has a rare combination of size and straight-line speed and can make acrobatic catches. The problem is Easley does not appear to trust his hands and will not only drop some catchable passes but tends to let the ball get into his body to trap it rather than reach out to pluck it. He is a bit of a strider and will need a lot of work on getting in and out of his breaks. The nice thing is that he has a good chance to see some action on special teams. He was a core special-teams performer at UConn during his first three years as he tried to earn a scholarship. 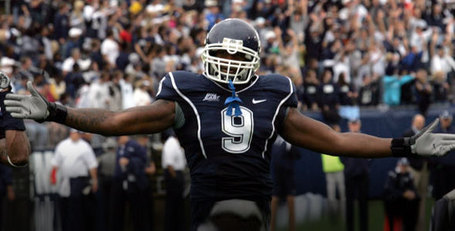 Player: Lindsey WittenPos.: DE/LBHeight: 6'4"Weight: 250 lbs.
2009 stats: 44 tackles (28 solo), 11 sacks, 1 FF
My expert opinion: After looking like a potential difference-maker for three season, Witten actually made a difference as a senior, totaling 11 sacks and a forced fumble in his first year as a full-time starter. He's a really good athlete with good speed off the edge, but he's nowhere near big enough to play end in the pros, meaning his future is almost certainly as a rush-linebacker in a 3-4 scheme. He also never really made a huge impact against the run and disappeared toward the end of last season, creating further concerns about his durability (never a good thing for someone with an already thin frame). And unlike Cody Brown before him, I'm not sure Witten will be able to make the transition to linebacker full time. But someone will take a chance on him because of his athleticism, and they could be rewarded; unlike Dixon, I think Witten could develop into a rotational player or a decent rush 'backer in the NFL with the right coaching.
Actual experts' opinions: Couldn't find any; instead, enjoy this hilarious YouTube video.
Things Chris Berman might say: "Lindsey Will He? Won't He? Witten"
Projection: Sixth or seventh round.