In case you haven't heard the happy news, it looks the NCAA tournament will not be a 96-team monstrosity next year, and instead will be a still imperfect, but as good as we could have hoped for 68-team tournament. The NCAA looked destined for a 96-team tournament, but it appears that the overwhelmingly negative reaction from the public may have sunk in and saved the day. The new proposal calls for CBS and Turner to share the rights and for every one of the tournaments 35 games to be broadcast on TV.

Anyway, I was reading the wire reports and came across some interesting reactions from two very prominent coaches. One of the two is clearly the embodiment of all that is good, the other is (probably) the epitome of evil. I've put their quotes below, and named the coaches after the jump. It shouldn't be too hard to guess who is who.

Coach A, who said the expansion to 68 is "better than nothing:"

Coach B, a noble man indeed, had a very different take:

"I have a tough time seeing why we have to change a concept that has been so good," [WONDERFUL MYSTERY COACH] said. "This year, the parity was incredible. If you have something that has become magical and what has enhanced it is not more games, but the Butlers and the parity. Those things are what have done it. George Mason. It's been proven time and again."

Guessed it yet? I thought so. Hit the jump for the answers

Coach A, of course, is none other than Jim Boeheim, the head of the Orange menace and occasional slayer of microphones:

Coach B, on the other hand, is the always righteous Jim Calhoun: 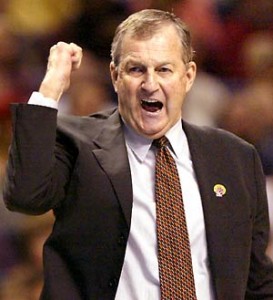 It could be an accident that his initials are JC, but I doubt it.