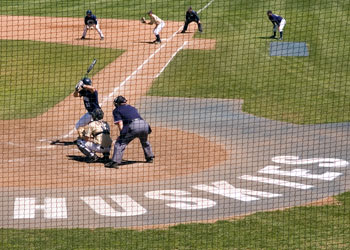 Now that basketball season has ended, it's been a little quiet around the blog. Sorry about that.

Thankfully, UConn's baseball team is going relatively crazy on the competition in 2010. You may have read commenter Fergy's excellent season preview from late February, or his recent update.

All seems to be going according to the plan for Pendersmania to run wild at J.O. Christian Field in 2010. The Huskies are rolling through Big East play, having won 10 in a row and 16 of 18. That streak has catapulted the Huskies into the Baseball America Top 25 for the first time ever, a milestone mark for a program that hasn't made a whole lot of noise nationally since the days of Walt Dropo.

Through the first half of the regular season, the offense has carried UConn to the tune of a '27 Yankees-like 10 runs per game. UConn is OPSing (on-base % + slugging %, for you non-baseball nerds) .871 as a team (exactly what Derek Jeter did at the plate in 2009).

Eight pitchers have pitched at least 10 innings in UConn's first 29 games; four - including three of the four regular starters - of them have a sub-4.00 ERA, and a fifth is at 4.05.

If you go by this site's unofficial numbers, UConn is sitting 41st in the RPI (they had been in the top 30 before last week...beating Villanova three times apparently doesn't do much for that), in decent shape to be an at-large selection to the 64-team NCAA regionals. It would be the school's first trip to the NCAA Tournament since 1994.

I guess what I'm saying is, book your 2010 College World Series tickets now.

Below the jump, we'll go into how the Huskies have lived up to our trademark grandiose expectations.

There's a lot to like in UConn's infield. Nemeth and Olt are two of the better hitters to play at UConn in a long time. I'm kind of drooling over Nemeth's decadent OBP and slugging percentage, and Olt is flashing a really nice combination of speed and power while playing a premium defensive position.

All five regulars here are crushing the ball, even smallish second baseman Pierre LePage (5-7, 157 pounds), who it feels like has been a starter at UConn since roughly 1997.

Springer burst on the scene as a freshman last season, winning the Big East Rookie of the Year award and making the first team all-conference. He hit 16 homers and drove in 57 runs, leading UConn in both categories. This year doesn't appear to be much different. Springer got off to a slow start, but is now leading the team in homers again, and walks (which is impressive given a lineup with seven guys OBP-ing .380 or better.

Ferriter's stats show a solid, dependable singles hitter with a decent eye and good speed; and Andreoli might be the worst hitter of the starting nine despite batting nearly .300. That's a pretty damn solid lineup.

Pavone and Elliot make a decent 1-2 punch behind the plate; each batted around .320 last season, and while Pavone appears to be the better hitter (and more patient), there's not much of an apparent downgrade when Pavone sits.

In the major leagues, an OBP of .350 is considered average for an individual. I know it's college (where offense is much better/pitching is much more awful), but to have the entire team getting on base 38 percent of the time is simply scrumtrilesant.

But now we must turn our attention to that bottom row. Who are the gentlemen holding UConn's opponents to an OPS of 30 points worse than Jason Varitek was in 2009?

Barnes, like most of the stars of this team, is a Connecticut native (Bethel, to be specific). He's been pretty clearly the best pitcher on the staff in the first half of the season despite Glynn's superhuman ERA (which is partly due to a high rate of unearned runs when Glynn is on the mound).

The sophomore hinted at his potential in 2009, when he struck out more than a hitter per inning and had a walk rate of under 4 per game.

That, it appears, has been the key for the top-end starters: they don't walk hitters. I'll make a wide sweeping generalization that the hitting talent in the Big East is nowhere near that of the ACC/SEC/Pac-10/Big 12/Big West teams, so for now UConn's starters can get by challenging their opposition. It will be interesting to see Glynn, Barnes and Nappo go up against the Big East's biggest-hitting teams, Rutgers and Pittsburgh, in a few weeks.

Vance, in addition to having the highest slugging percentage on the team so far - and having a current 17-game hit-streak - is also UConn's closer. He's recorded all four of the Huskies' saves this season. Thanks to his name, he probably also leads the team in Office references. ("Now pitching, Kevin Vance, Vance Refrigeration.")

Take a look at Oberg's line, too. He appears to be a Goose Gossage-type relief ace, which means that he is under strict UConnBlog orders to grow a phenomenal mustache. Make it happen, Scott.

This is as talented a team I've seen at UConn since my freshman year in 2005. They are as powerful as Godzilla (either/or), and while there's not too much pitching depth, the top line is more than adequate to give the Huskies an excellent shot at winning the Big East regular season and tournament titles.

The best part about all of those charts? There's only one senior on the friggin' roster. Assuming no one leaves for the greener pastures of minor league baseball (seems like Nemeth, Olt and Springer could all make decent money next year), next year's team promises to be even better. Will UConn win national titles in football, men's and women's basketball and baseball in 2011? I'm not saying absolutely either way, but I would wager most of my meager earnings on such a notion.

Anyway, now a brief breakdown of the 2010 schedule up to now:

UConn opened its season taking two of three in the Big East-Big 10 challenge, then took three of four at Cal State-Northridge. UConn then picked up a win over perennial power (though down in 2010) USC, before dropping a close game to Tennessee.

The Huskies' worst loss was an 11-8 home loss against Sacred Heart March 20; it was also UConn's only loss by more than two runs.

After being picked third in the preseason Big East polls, UConn opened up conference play March 26 at Louisville, a preseason conference favorite (and ranked 6th in the RPI). After dropping the first two games of the series (1-0 and 4-2), Matt Barnes threw eight scoreless innings to lead UConn to a big road win in the series finale.

Jim Penders' crew hasn't lost since. Now that's the kind of team I can get behind.

At 7-2 in the league (with 18 league games remaining), UConn stands in second place in the Big East, a game back of South Florida and tied with Rutgers. The Bulls and Scarlet Knights play each other this weekend, and UConn travels to lowly Georgetown, meaning the Huskies could grab first place by Sunday afternoon.

Once that happens, we kickstart the "UConn Baseball Awareness Express" full-stop, with our final destination Omaha in June. It will be much like the Lex Express, only cooler.

As I write this, UConn is playing Hartford in a non-conference game at J.O. Christian Field. For those interested, and if you've read down this far you are, the score is 17-0 Huskies. Suck on that, TheHartfordBlog.

UConn travels to Brown tomorrow before the weekend series at Georgetown. I'll be posting a blurb after every game, and hopefully getting up some sort of preview for the last six Big East series.

This way, we'll all feel better when the baseball team is destroying everybody and Jim Calhoun doen't get any big commitments. Slightly better.