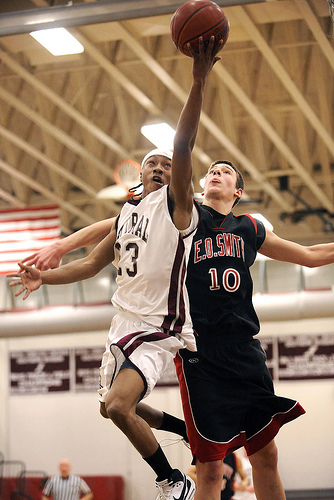 There's little doubt that UConn could use some reinforcements heading into next year. By my count, the Huskies need a guard to play alongside Kemba Walker who can hit somewhere between 35 and 100 percent of his jumpshots, and a skilled big man to push the Oriakhi-Majok-Okwandu trio of offensive hell.

Coach Cal, benevolent leader as we know he is, has perhaps solved the second problem this morning.

According to Scout.com (I don't have a Scout subscription, but the headline on the UConn Scout page, as well as this Boneyard message board thread, have some of the details) UConn picked up the committment of Tyler Olander, a 6-8 senior forward at EO Smith in Storrs. (UConn alumni/students/visitors may know EO Smith as "the high school you pass walking by the art complex on Bolton Road on your way to Wings or DP Dough".)

Olander chose UConn over Wake Forest, Florida and Virginia, which makes sense because, again, he can take a jump shot on EO Smith's campus and hit UConn's campus.

The book on Olander is that he is athletic, a good finisher, and a decent passer.

The New England Recruiting Report ranks Olander the 5th-best prospect in Connecticut (and eighth in the region) for the 2010 class, and the best non-prep school player. So this doesn't sound like an overwhelming get, but at the very least it sounds like the kid has some skills. UConn already has enough pure athletes...time will tell, but maybe it's good that we start balancing the scale a bit.