In or out?: The quest to save face, Part IV

Share All sharing options for: In or out?: The quest to save face, Part IV 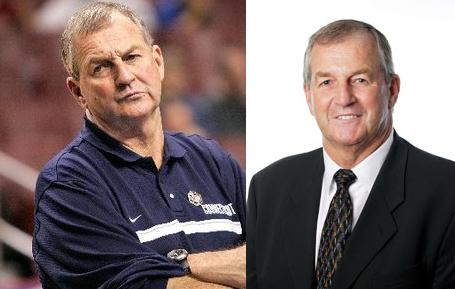 In a recent episode of Family Guy, a weekly notebook chronicling the struggle of the modern family in a world fraught with economic challenges and tension abroad, Stewie and Brian, in an homage/ripoff of The Simpsons, use a remote control to travel to alternate realities.

They visit to all types of zany places -- one where dogs assume the roles of humans and vice versa, another where they are depicted as Disney characters -- and fun is had by all.

There's also one where each person has two heads: one sad, one happy. At the time I first saw it, this portion seemed a bit odd. Sort of funny ... but mostly odd.

However, it wasn't until I re-watched the episode a day ago that I realized there was something familiar about it.

Then, it hit me: This is the reality we live in post-Louisvillocalypse. To prove my point, I've provided a brief example, as well as the usual Tourney data, after the jump:

All info from BB State, mostly because I thought it was a site for BB gun enthusiasts.

Happy Justin: Yeah, but Joe Lunardi, the guy who got 63 of the 65 teams right last year, has us in! We're dancing, baby!

Happy Justin: But Luke Harangoofy's gone for the year! And USF has lost four of its past six and has virtually no shot at making it any more!

Sad Justin: Did you watch the end of Louisville game? ... We stink. ... And Jerome Dyson playing basketball makes me hurt on the inside. No way we beat both. Good bye, cruel world.

Happy Justin: Yeah, but have you SEEN Dyson slam it? He's so athletic, and ... um ... seriously, he can slam it! And what about Stan? Have you SEEN Stan? He's going to be a lottery pick (somehow), and he's scored in double-figures in every game this year. Ahhh. You hear me, me?! AHHHHHH!

Sad Justin: They stink ... and so do we. ... Sigh. ... No way we win in MSG. New York hates us and we shout unnecessarily mean things at things at people as they try to enjoy their breakfast parfaits.