Share All sharing options for: Some orange flavored history

You'd think that a giant dopey orange would be the stupidest mascot a school could use, no? It is the only natural assumption, but luckily, Syracuse has been at this athletics thing since 1873, so they have had plenty of time to prove that theory wrong.

As I mentioned yesterday, the Syracuse mascot has not always been the squishable Orange we all know and hate. In fact, up until 1890, the school's colors were pink and green, not the deplorable orange of today. However, I have barely scratched the surface of Syracuse's long and shameful mascot history.

Find out what the picture on the top of this post is about after the jump.

As you may know, Syracuse has only been called the Orange since 2004, prior to which they were the Orangemen or Orangewomen (sexism!). Sexism not your thing? Don't worry, because Syracuse has you covered with plenty of racism as well. You see, that impotent little orange known as Otto is only about three decades old. Prior to that, Syracuse was represented by a lovely little stereotype known as the "Saltine Warrior:" 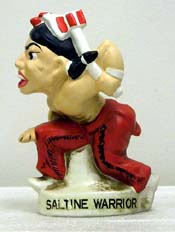 Classy, I know. Per wikipedia, here is the story of his creation:

In 1931, a Native American warrior known as Nathan March aka: "Saltine Warrior"photo became the athletic mascot. The name derived from an article describing an archaeological dig on campus allegedly uncovering the artifacts of a Native American warrior.[9] The warrior was called the "Saltine Warrior" because of the abundant salt deposits in the Syracuse, New York area. The article was later revealed to be a hoax, but the mascot remained for next four decades.

It's not all bad with the Saltine Warrior though, I hear he goes great with tomatoes and mayonnaise. Hate on.