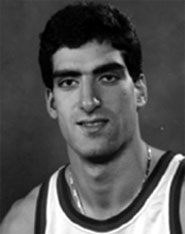 1. Luscious eyebrows that consume 3/4 of his face

2. He attended the most vile educational establishment

Now, one would think that a 44-year-old with a propensity to wear unbuttoned polo shirts with no under shirt and use the the word "personall" like it's no big deal would never mix it up on the ones and twos (as the kids say). But the fact that Seikaly is a real, no-this-isn't-an-elaborate-joke DJ shouldn't be all that shocking, considering he was one of the game's true trail blazers.

And by trail blazer, I mean completely forgettable; although he had a much better pro career than I remember (and by that, I mean A career) and set some records while learning broken english at Syracuse, the Lebanese Locomotive was actually the first draft pick the Miami Heat ever made. In an unrelated note, it took the franchise eight years and three coaches to make it past the first round. In a related note, how Rony and Rice-a-Roni never teamed up is beyond me.

But Ron-Ron, as you may have guessed, has had quite the life post-basketball: He became a real estate tycoon (even without the help of the PC game), dated a super model and then dumped said super model without much remorse because he had "lots of girlfriends." Oh, and there may have been some inference of spousal abuse or something silly like that. But I assume he was merely fulfilling one of his final graduation requirements.

Most importantly, though, the breakup seems to have led Seikaly to his true passion: ungodly music targeted toward people half his age who have an affinity for glowing things and hallucinogens.

But after visiting his high-tech web site, which bumps what I assume is the 2010 version of "Sandstorm," it seems "The Spin Doctor" actually fits right in.

To steal a line from the worldwide leaders in hate: Syracuse is a fine university.