Share All sharing options for: Huskies fill out coaching staff 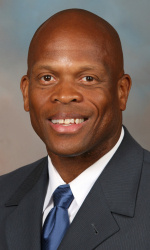 The UConn football team finally filled the holes in its coaching staffs created by the departures Scott Lakatos (Georgia) and Dave McMichael (West Virginia) with the hirings of Darrell Perkins and Jonathan Wholley.

Perkins, who spent the last two years coaching defensive backs at Louisiana Monroe, will serve the same role for the Huskies, while Wholley, a former grad assistant, will take over for McMichael and coach tight ends.

Not much else to not here, aside from the fact that not only is there a place called Ferris State, but it also has a football team for which Perkins coached on his whirlwind tour of obscure collegiate athletic programs; after serving as a grad assistant for Purdue, Perkins made stops coaching for Ferris State, Charleston Southern, Northern Colorado and ULM.

And Wholley is not only an alum, but he's one of the sole survivors from the glory days of UConn basketball six years ago.

One plus to Perkins is his previous stops come at areas of the country (Colorado, Louisiana, Indiana) that UConn rarely recruits or, at the very least, has very little pull in. So perhaps in the same way Terry Richardson has set up a pipeline to Florida, Perkins can do the same in Louisiana, usually one of the more talent-rich states.

Otherwise, as long as both are aware that we're winning the Big East this year, they should do just fine.