In or out?: The quest to save face, Part III

Share All sharing options for: In or out?: The quest to save face, Part III 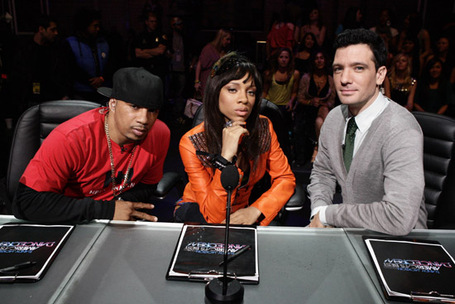 As Mick Jagger and David Bowie once sang uncomfortably close to each others' faces as they gaily paraded through what appears to be a back alley and a condemned building, "They'll be swinging, swaying, records playing; Dancing in the street, ohhhhhhhhhhh."

And let me tell you, my friends - the records are a-playin'.

After UConn dropped its second Top-10 team in the past three games and third in 10 games, basically every bracketologist has the Huskies slipping on their dancing slippers for the time being: ESPN's Joe Lunardi has them in his "Last Four In" section; Brett McMurphy of AOL Fanhouse says we're in this week; So does Blogging The Bracket; and Bracketology 101 already had UConn in, and is now doing a bit of gloating in light of the big Big Monday win.

But in order to get an even better idea of the Huskies' chances at dancing, we went straight to the experts: the judges from "America's Best Dance Crew."

All info from BB State, mostly because they still call The Morgue the Hartford Civic Center.

Lifts the bottom of his shirt and reveals his six-pack to a raucous applause.

MoLo: That's right. OK, JC. What do you think about the Huskies?

JC Chasez: Man, I just have to say that was one HELL of a performance. You guys kind of got into some trouble in the second half and they kind of crept back into things. But you guys showed perseverance ... I remember when I was on a big stage like that - you know, with my mega-succesful group N'Sync -- and perseverance was key.

And -- one last thing. My man Kemba. Woah! That's all I have to sa -- can we get a slow mo of that last dunk? See that, and there he-UNH!!! That's what I'm talkin' about. And Huggy was definitely a little P.O.'d after that one, for real. But you really did your thing, and props for that. You guys definitely have that It factor, much like, y'know, I had when I released my hit album, Schizophrenic. Nice job. I can definitely see ya'll dancin'.

Lil' Mama: I love ya'll guys. Ya'll definitely stuntin' right now, big time. My man Stan. Stan comin' through in the clutch. I think your basketballity was off the chain. Ya'll really rocked it hard, but you didn't lose focus on YOU, and I got mad props fo' you on dat. ... But ... um ... Dyse. My man, Slicin' Dyse.  Even though you weren't Da Man this time, you've been so consistent and I love ya'll for that. Fah real.

MoLo: OK. Last but not least, my dog, Shane Sparks.

And, uh, then my man here with the SEARiously killer performace. My man Simba. He really got things doing it. And Coach. Man, Coach. You're really the backbone of this group, and you're just on a whole nutta level with the big cheese up and about. ... Ya'll really kilt it on that. Ya'll kilt the whole league!

In or out?: In, but nothing's final yet.