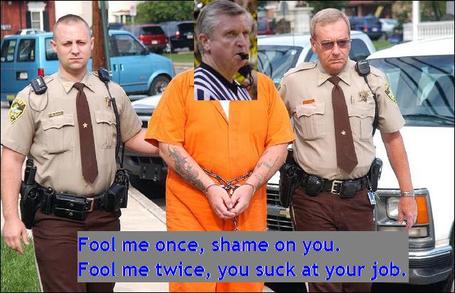 And that should about wrap up UConn's NCAA Tournament hopes in a nice little box, to be sent away to some Atlantic 10 team that would be under .500 with our schedule. No, I'm not bitter or anything.

#2 Syracuse beat UConn at the Carrier Dome tonight, 72-67, sending the Huskies to their seventh loss in 10 games.

The Orange led by seven at halftime, outplaying UConn but remaining within striking distance. From there, Syracuse whipped UConn's ass for the first eight minutes of the second half, and UConn whipped Syracuse's ass for the next 11.

Huge credit to Kemba Walker (who continues to show that as he goes, the offense will go) and Jerome Dyson (who hit a couple huge 3's during the comeback). UConn finally looked like the 18-6 team they could be, rather than the 14-10 team they are, for the last half of the second half.

And then John Cahill whipped everybody's ass in the last minute (not for the first time this season).

Cahill's phantom timeout, granted after Scoop Jardine's shot was blocked and rebounded by Stanley Robinson, turned the game on its head. Instead of the Huskies controlling possession with 33 seconds left in a tie game, Syracuse inbounded the ball. Or at least they were going to until a not-awful-but-given-the-circumstances-come-on-give-us-a-break foul call on Majok sent Wes Johnson to the line for two free throws.

That sequence will be all anyone remembers about this game. It's unfortunate that it had to be that way, because this was an excellent, exciting basketball game for the last 12 minutes of the second half. But let's be honest: the call didn't decide the outcome, even if it shifted the probabilities quite a bit. UConn did more than enough to throw the game away in the last 90 seconds, without John Cahill's help.

This was just another game that got away for UConn, referee call or no referee call. The Huskies once again played even with a top 10 team (displaying intensity and heart that was noticeably absent in losses to Providence and Louisville), and once again found a way to come up small in the game's biggest moments. Holler if you hear me, Jerome Dyson taking a not-open 30-footer with 18 seconds left, trailing by two.

As an aside, man...we really could've used Jim Calhoun out there tonight.

A moral victory here and there is fine, but the Huskies are already in too deep a hole to take more moral victories. At 14-10, and 4-7 in the league, UConn pretty much needs to win five of their seven remaining games (four of which over similar or better teams; three of which likely needing to be on the road - three more than the Huskies have this year) to even sniff the bubble. Even if that happens, with UConn's one decent win (Texas) looking worse and worse, the Huskies would probably have to get to the semifinals of the BET to be sure of a bid.

Yes, it's possible. No, it's not likely. Yes, we will continue to hope against hope (until the next heartbreaking loss, anyway) that this listing ship can be saved.

But everything after about the 1:40 mark of the second half was just the latest in a series of kicks to the balls from the basketball gods. And what else can we conclude, other than that this is not UConn's year?

Our only consolation is that today was (by far) the highest traffic in the 17-month history of this blog, and for that we thank you. Things got a little heated in the open thread, understandably, but let's try and keep it civil from here on out, OK? (That goes for both fanbases.)

Well, our other consolation is that Porter will be living up to his end of HoyaSuxa's bet and dancing to the Syracuse fight song on video. So check here in next day or two for that. In the meantime, cheer yourself up with this hilarious news blooper.