Share All sharing options for: The five things I'm most excited about for my return to Connecticut 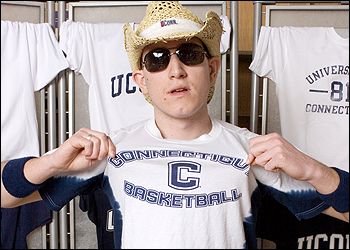 Yes, that is me, and no, the cowboy hat will not be coming back to Connecticut with me.

This basketball season, we've teamed up with the fine folks over at Volvo to help promote their new Volvo S60. A few weeks back they were kind enough to send me to Big East media day, and in January, they'll be sending me back to Connecticut for UConn's matchup with Tennessee.

As part of the campaign, Volvo has tapped 16 writers -- one from each Big East school -- to talk about why they are the biggest fan of the Big East. In March, they'll select the Big East's biggest fan. That person's school will get a $10,000 scholarship donation, and the biggest fan will receive a new Volvo S60, which is nice.

There are a couple of ways you can help me out here. First, join the discussion, these posts are designed to talk about the experience surrounding UConn basketball, so we want to hear from you, so comment -- commenting is key. Second, like this on Facebook or retweet it on Twitter. The more exposure this gets, the better UConn, and I, do.

Third, and finally, go to MyBigEastVolvo.com and vote for me. There's a pretty picture of me and I show up in the big video as well, but voting is key. As of this writing I have 13 votes and the Louisville writer is pushing 5,000, so we have a bit of work to do. I have faith in you all though. Now, on to the five things I'm most excited about for my return to UConn.

5. Being the loudest person at the XL Center

We've talked about the XL center here before, so we know that it is not, as they say, the "best" place to watch UConn basketball. However, it is the place UConn is playing Tennessee, so it's where I'll be. Sure, it's not the loudest place in the world, but that just means my yelling will stand out more. Plus, look at that picture on top of this post, do I look like the type to sit down just because I'm annoying some octogenarian? Didn't think so.

One of the nice perks of this program with Volvo is that while I'm in Connecticut, I'll get to drive around in one of the S60s. Not only does that mean I'll get to check out the car, but I'll also get to escape Hartford and head to Storrs. Sure it's small, and windy, and cold as hell in January, but it was home for a long time and I love the old girl. Yes, it only has about four places to eat and three to drink, but since I'll just be there for a weekend, variety isn't a huge concern. I'm thinking Sgt. Peps for dinner and Huskies afterward, but I'm open to suggestions. What are your thoughts, best UConn food? Best place to drink?

3. Being around people who understand what it's like to be this crazy about UConn

I moved to Chicago four months ago. I lived in St. Louis before that. Both places are quite nice, and I'm enjoying Chicago immensely, but these are not places where college sports have any sort of hold on the collective conscience. That, in turn, makes me look like a crazy person. I take the whole "live and die" with UConn thing as seriously as one can without the actual death, and that causes problems, because it makes me look like a crazy person. True story, about a month ago, a few of my newfound friends remarked that I had become more relaxed and fun to be around than I was when I first met them. We traced back when the shift and mood happened and yes, it came when UConn football started winning again. So yeah, I take this school too seriously, but at least in Connecticut, I won't be the only one.

2. Meeting some of you fine folk

Several of the blogs around the network do reader meet-ups around games, either before or after. Living in the midwest, this has been a little difficult for me to replicate. However, since most of you are from Connecticut, I'm committed to not wasting this opportunity. Either before or after the UConn-Tennessee game, we will have some sort of event in Hartford. You're all invited, and I'm looking forward to it. Details to follow, but I'll see you there.

1. Seeing the Huskies in person

I didn't get to see UConn play in person last year, breaking a streak so long that I can't imagine counting it. That tragedy will, thankfully, not be repeated this year. I love everything about UConn games -- watching Jim Calhoun, listening to the pep band, mocking the intermission activities they have on the court -- all of it. I can't wait to get back, and I especially can't wait to see the difference in Kemba Walker from his freshman year. He's so amazing to watch on TV that I can't begin to picture the experience live. This is going to be good.

Again, all thanks to Volvo for setting up this program. Remember to comment, retweet and share this. And don't forget to vote.