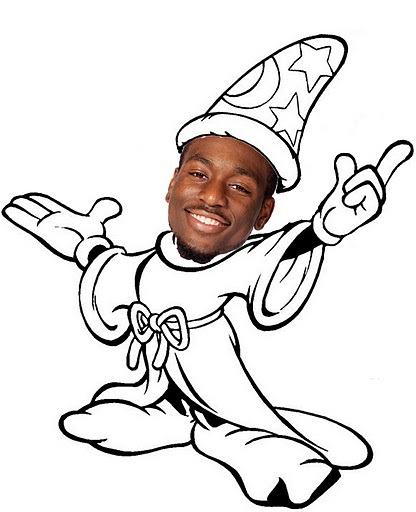 (Photo courtesy of the incomparable kemba walker is my hero)

Kemba Walker played 1-on-5 against Wichita State in the second half.

Just five days after making our eyes bug out like Looney Tunes characters by dropping a career-high 42 points on Vermont, Kemba may have outdone himself with Monday's performance: Walker scored 31 points -- 29 of which coming in the second half -- on 8-for-16 (50%) shooting from the floor and 14-for-15 shooting from the charity stripe, and, just because he's an equal opportunist, he threw in three steals and two assists while almost single-handedly erasing a nine-point deficit.

Down 73-70 with 4:07 left in the second left, Kemba either drove it to the rack or spotted up on nine straight offensive possessions and scored the Huskies' next 12 points, going a perfect 6-for-6 from the line, 3-for-3 from the floor and 1-for-1 from 3-point range in the process.

"He was the maestro," Calhoun said. "He used his speed and played through every play."

He was absolutely astounding.

He needed to be. Because outside of Kemba, there basically is no offense.

It's not just that Kemba was absolutely KEMBAWESOME; it was that he needed to be for UConn to have any chance at winning.

Had Walker put up a performance similar to last season's norm, it would've been a blowout victory for the Shockers. Instead, he played out of his mind and the Huskies walk away with a much-needed victory, one that finally gave us a glimpse into a season that going into it was as predictable as a game of craps.

Unfortunately, what we learned about the players not named Kemba wasn't so uplifting.

Alex Oriakhi finished with a decent stat line (12 points, 7 rebounds), but he still has no offensive game outside of putbacks and easy buckets at the rim that are basically force-fed to him from Kemba drives. (To be fair, Oriakhi's offense is a good fit with Kemba's skill set, but his glaring inability to make anything for himself will prove detrimental in the long run.) And considering his size advantage (he may be only 6-9, but he's built like a small condo) and the lack of other rebounding options on UConn, he should have double-digit boards every night.

SHABAZZ Napier could eventually team with Kemba to form the quickest backcourt in the nation, but as of now, he's too erratic (2-for-6 from the floor, 6-for-10 from the free throw line) to provide anything substantial (he had 10 points on the night). Roscoe Smith looks like he'll one day be fantastic, but as of now, he's essentially a spot-up shooter (4-for-4 on the day). And Jeremy Lamb (7 points, 8 rebounds) could be the swiss-army player I thought Jamaal Coombs-McDaniel would be. But right now, his offense is a work in progress.

And everyone else on the roster might as well be giant cardboard cutouts.

There was nothing to do but give it to Kemba. So each time UConn trotted it down the court down the stretch, the Huskies ran the same play: give it to Kemba and get the fuck out of the way. (Not, of course, without bumbling along at first by moving Kemba off the ball and letting SHABAZZ dribble the air out of the ball. Nicely done, boys.)

And, almost incredibly (and with through the help of some great officiating), Wichita State could do nothing to stop it.

But teams won't fold as easily as the Shockers.

Especially in the Big East.

After early foul trouble limited him in the first half, Kemba basically got to the rim any time he  wanted in the second, missing just three times inside the arc after halftime. And while it will be tough for any guard in any conference to keep up with the fleet-footed Walker, Wichita State, with no player standing over 6-9 playing any significant minutes, simply didn't have any one to stop him once he knifed his way into the paint.

But that will change once the less goofy opponents' mascots become. It won't take long before teams start crowding the lane and forcing Walker to shoot (and after a 1-for-4 showing from 3, who can blame them) and the other players on the Huskies' offense to beat them.

And right now, I can't see that strategy failing.

Because right now, if Kemba isn't the one shooting, it's a bad shot.

Still, if he can somehow play like he did today, that's certainly not the worst option in the country. And it's a million times better than anything UConn had last season.

Walker proved today that he alone can will this team into being far more competitive and a much more lively bunch than anything the Huskies trotted out on the court last season.

And while some of the deficiencies of the supporting cast may ultimately keep this team from returning to the NCAA tournament, that alone is a huge win for the program and its fans.