UConn 89, Vermont 73: In case you were unaware, this is Kemba Walker's team

Share All sharing options for: UConn 89, Vermont 73: In case you were unaware, this is Kemba Walker's team

Tonight's 89-73 victory over Vermont answers a longstanding question of mine: could Kemba Walker win the America East Conference by himself? Yes. Yes he could.

There were a couple nice performances on UConn's side tonight (among the prominent numbers in tonight's box score: Roscoe Smith's 15 points and 3-for-3 shooting from 3, Alex Oriakhi's 11 points, SHABAZZ~! Napier's 5 steals), but let's be honest. Kemba Walker is the reason the otherwise-sluggish Huskies rolled so comfortably tonight.

Walker scored 42 points, tying Donyell Marshall and Cliff Robinson for the highest scoring total at UConn under Jim Calhoun, and was sensational just about every time he touched the ball.

Kemba was good inside the 3-point line, where he was 11-for-15. He was pretty good from beyond the arc, where he was 4-for-9. He was great from the free throw line (8-for-10). He was UConn's leading rebounder, with 8. He had just 3 assists, mostly because no one else could hit a shot in the first half. He was the only person who could restrain Jim Calhoun from strangling Niels Giffey at one point in the second half.

Vermont led by three at halftime, 36-33, despite Kemba basically playing 1-on-5. Perhaps UConn's players were rendered helpless defensively by the world-historically horrifying mouthbadger above the lips of Vermont's Evan Fjeld: 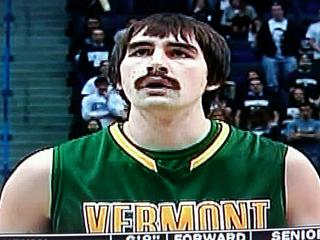 But whatever the reason for the slow start, once the Huskies started getting contributions from non-Kembas, they pushed the lead to as much as 20. This early in the season, for a team prominently featuring five freshmen and a sophomore, that's all we can ask for.

For now, chalk up the first 25+ minutes of tonight's game to a young team, on an off shooting night, who became dependent on one of the budding superstars of college basketball. Teams will start to figure out that maybe they should try and keep Kemba Walker from beating them. For now, let's just sit back an marvel at the Kembawesomeness.

Up next for UConn: a luxurious trip to Hawaii for next week's Maui Invitational, which begins Monday at 3 p.m. against Wichita State. Pack your brightly-colored shirts and sunglasses.