Share All sharing options for: Second-best book ever written about UConn published 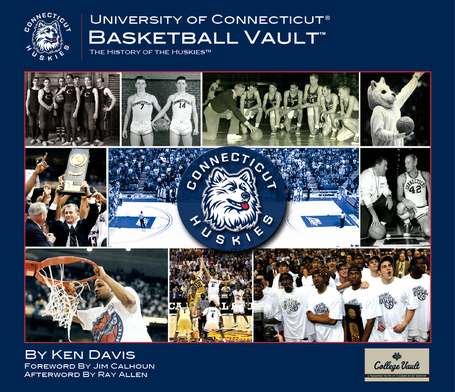 The book is "The University of Connecticut Basketball Vault," and it is a new coffee-table book about the Huskies that was written by Ken Davis. Sadly for the Basketball Vault, it is not "Hoop Tales," a book that is so good that UConn-alum and former SI senior writer Leigh Montville sleeps with it under his pillow. No really, Montville said that. Plus a close family friend and my father co-wrote it and I love breaking out the "reverse nepotism" tag.

Anyway, I haven't had a chance to check out the Basketball Vault yet, but it seems like a nice idea, plus it has contributions from both Jim Calhoun and Ray Allen, which is always a good sign (just think how much better The Grapes of Wrath would be if Steinbeck had let Calhoun collaborate).The full release from UConn is after the jump.

Storrs, Conn. - It took nearly a century for a tiny agricultural school in the hills to transform itself into the powerful state university that is UConn, and the Husky basketball program has been an integral part of the school's rise.

But, "Connecticut basketball is really about the players and coaches who have brought the program though various eras, each dotted with superb stories and unforgettable memories," says men's basketball coach Jim Calhoun in the foreword to the University of Connecticut Basketball VaultTM: The History of the Huskies.

All of those players, coaches and unforgettable memories are here in this 144-page coffee-table book, designed to look like a treasured scrapbook. Opening the Vault is like getting a guided tour through your own personal Husky basketball museum, and who better to be your guide than veteran sportswriter Ken Davis, who has covered the University of Connecticut men's basketball program since 1985. In the UConn Basketball Vault, Davis mixes great game coverage with behind-the-scenes anecdotes and personal stories to present a view of Husky hardwood history that you won't find anywhere else.

Not only are all the great stories here, but you'll also find "hands-on" replicas of unique memorabilia plucked from Connecticut's extensive campus archives. Explore the book's dozens of sleeves and pockets to discover a 1920-21 schedule booklet, a handwritten copy of the 1925 athletic budget, a 1948 telegram to the team from former captain Wally Luchuk, publicity questionnaires for stars like Art Quimby and Worthy Patterson, Ray Allen's 1992 recruiting trip itinerary, program covers and tickets from both the Huskies' national championships, and much more.

"This scrapbook of pictures and memorabilia, along with the UConn story written by Ken Davis, brings back lots of terrific memories," says former star Ray Allen, who shares his thoughts in the afterword.

The University of Connecticut Basketball VaultTM: The History of the Huskies is part of the Basketball VaultTM series of books from Whitman Publishing, LLC. The 144-page hardcover 12-inch by 10-inch book with slipcase is available for $49.95 in bookstores. The book can also be ordered online at www.WhitmanVaultBooks.com.