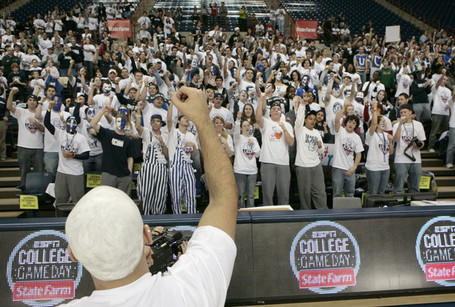 (Photo courtesy of Courant.com. Their gallery of Gampel GameDay photos is here.)

When I get into a creative funk, there's always one surefire solution: steal borrow concepts from Bill Simmons. With that in mind, and since the UConn women deserve some props for being so awesome as to bring College GameDay back to its original home, I'm going to catalogue their first-ever appearance on College GameDay Saturday morning.

Now sure, ESPN in their infinite wisdom decided to bring GameDay to Storrs in January 2005 (eight months before I moved in as a freshman) and in January 2010 (eight months after I moved out as a graduate), so a big eff you to the Worldwide Leader. Still, it's pretty cool to see UConn showcased like this.

I assume that all good UConn fans watched the show live and TIVOed it for future viewing. So think of this piece as a companion guide of one-liners for when you rewatch GameDay with your families, gathered around the fireplace.

Parental discretion may be advised.

10:00 a.m. - Ah, my home. Gampel Pavilion. The big marshmallow dome. The weird trampoline-like floor. The one bathroom-per-gender. God, I miss it.

10:02 - Rece calls Jay "everybody's favorite wingman," although I have it on good authority that he robbed Digger's girl the other night. Though Digger insists that Jay took his sloppy seconds. And that will do it for the Jersey Shore references in this diary, unless Digger asks Jay to pass the rolls at any point in this episode.

10:03 - I find it adorable that the UNC men apparently stole a play from the UConn women. As if we needed further evidence that Geno is a better coach than Roy Williams.

10:07 - Seven minutes in and now we realize this is going to be one of those "Digger is a Notre Dame homer" shows. He will be getting booed for the remainder of the hour.

Although more than anything else, I think I'm anticipating tonight's "just like football" chant once the women fall behind 14-0, make a stirring comeback and win in double OT win by 25.

10:08 - Will UConn students be able to keep up the enthusiasm for a full hour? Probably. Will ESPN's analysts be able to talk about women's basketball for more than 10 minutes out of the hour without blanking and letting loose a sexual slur? Here's hoping.

10:10 - I have been inspired to write a poem, dedicated to Notre Dame coach Muffet McGraw:

Sat on her tuffet

As her team lost to UConn by 30

Thank you. I could've probably rhymed that last line with "dirty" or something, but eh.

10:11 - As expected, UConn students having issues coming up with cool signs. Either that, or any actually funny signs were removed by the Gampel security gnomes. I'm willing to accept either possibility.

(I don't know if that's more crass/awesome than "[Villanova logo underneath the Gampel scoreboard] -agina", but I'm willing to open the debate.)

10:15 - Oh, back to men's basketball. We've now entered the depressing portion of the show for UConn fans.

10:17 - Hey, you know I think Kentucky's 2000-win party was totally lame. Could've been so much cooler. Luckily, when all of Calipari's wins get wiped away by the NCAA, they'll get a re-do.

10:18 - Doris picks Syracuse as her surprise men's team. And I was just starting to like her. Also, since she picked the 'Cuse, your blonde joke of choice goes here.

10:19 - Other notable UConn fans showing up this morning...Diamond-eyed guy is very much present. As is Dale, the Blue and White Twentysomething. I'm disappointed that the women's basketball knockoff of Big Red couldn't bring his Dr. Seuss hat out to Gampel this morning.

10:19 - The creepy Auriemma-face shirts are still less creepy than the creepy Calhoun-face student section shirts. I'd still buy both of them, though, if UConn were to sell them. Unfortunately, UConn's athletic marketing department wouldn't take advantage of a marketing opportunity if a marketing opportunity told them it weren't wearing any underwear. (Sorry, I know I promised no more Jersey Shore references.)

10:21 - Do you think the pink-shirted young lady between Doris and Jay feels out of place, given that SHE'S THE ONLY ONE NOT WEARING BLUE OR WHITE. COME ON, GET IT TOGETHER.

10:26 - "I had a chance to call the Duke-Boston College game, and I had a chance to talk to the two coaches," says Rece, referring to Coach K and color commentator Bob Knight. Womp womp, Al Skinner. It's like you weren't even there. So in that sense, you're the perfect representative for Boston College.

10:27 - Coach K lamenting SportsCenter's lack of showing great passes on the highlights, but he forgets that white players don't get on SportsCenter. So he's SOL.

10:28 - UConn fans with a "this is our house" chant, which clears that up for all the viewers.

10:28 - Doris Burke is saying things that 75% of the audience is not aware of, like "there are more than three or four teams in women's college basketball".

10:30 - OK, who's the poor bastard carrying the Jacquie Fernandes enormous-mugshot poster? Did he lose a bet?

10:32 - Most puzzling sign of the night - "Geno: Prom?" Are there proms where middle-aged basketball coaches dance with co-eds? And do all these proms end with Jim Boeheim working up the courage to ask Juli to dance, then awkwardly slow-dancing to "All My Life" by K-Ci & Jojo while desperately trying to avoid staring into her eyes so that I, I mean he doesn't weird her out? Not that that's a true story or anything.

10:35 - HEY! I USED TO LIVE IN THAT DORM COMPLEX! When you're a stupid freshman, nothing beat the Jungle. Prove me wrong.

10:36 - Baylor center Brittany Griner is 6-8, can dunk, and to top it off, she has a deeper voice than Jeff Adrien. Quite the total package, she is. Tina Charles is better, as the crowd notes.

10:42 - Geno is 712-122 lifetime which is just absurd. And since 1994, if I remember correctly, UConn's lost something like 25 games. Now that's a team that never lets you down. YOU HEAR ME JIM CALHOUN THEY NEVER LET ME DOWN

10:49 - Hey, Diamond-Eye Guy is shooting the Halfcourt Shot Sponsored By Insurance Provider That Does Not Offer Coverage In My State. Can he even seen through those diamonds? More importantly, did he have to fight Pink Hat Guy to the death in order to get this gig?

And now, poetically, all he has left are diamond eyes...for the next 12 hours until the women's game tonight.

It's fun to imagine him potentially giving tours to incoming HS seniors interested in coming to UConn. With apologies to the George Bush episode of the Simpsons:

DIAMOND-EYE GUY: Does anybody have any questions?

DEG: Questions not having to do with the paint on my face?

10:52 - 52 minutes into the show, I realize that GameDay will not be the usual two-hour long show. So we can make GameDay shorter for the women's team, but we can't get a men's lacrosse team at UConn? You're killing me, Title IX.

10:53 - HEY! I'VE WRITTEN A STORY FOR A CLASS ABOUT HOW THEY MAKE ICE CREAM AT THAT PLACE! Meanwhile,  Meghan Gardler should've been on her own split screen for the last hour, if ESPN really wanted to do something revolutionary.

10:54 - Hey, good to see the students remember that Michigan State beat us in the Final Four last year. No way they should've gotten more boos than Villanova or Syracuse, though.

10:55 - If you had Emeka Okafor in the "shoehorn in the name of a great player from the school hosting GameDay for a cheap cheer" pool, collect your $1.50 now.

10:59 - And here we go, the UConn/Notre Dame pick. Digger picks the Irish, and he mentions a player, Melissa Lechlitener, I'm almost sure he's never seen or heard of before 10 AM this morning. Everyone else goes UConn, because they aren't insane, and we fade out by panning the crowd... HEY! I KNOW THAT GUY!

Well, that was fun, wasn't it? Let's all give a hip-hip hooray to Geno for building a team so awesome that ESPN simply had to come out and see for themselves. Also, thanks to the women's AP poll, which was gracious enough to not leave seven or eight empty slots between UConn and the second-best team, thus setting up a theoretical #1 vs. #3 matchup tonight.

Personally, I think we should do an open thread for tonight's big game, at least until it gets out of hand. Anyone with me?