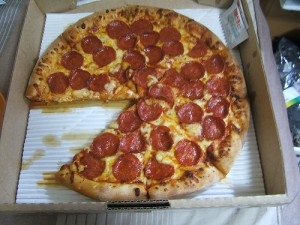 Just so we're clear, the bowl game is not named after this delicious-looking pizza, but the website you may order it from.

In the process of coming up with various lists for our end-of-decade feature (which I swear is in the pipeline and not at all one of those things where I promise something and get excited about writing it and then flake out), I came to a stark realization: UConn football doesn't have too many memorable moments.

Of course, this makes sense. UConn hasn't been very good for very long in its Division I-A history. And unlike the basketball teams, they only have 12-to-13 games per year to choose from (as opposed to 30+). And the college football postseason is a mostly-meaningless joke. When you add all three factors together, you realize that UConn's gridiron highlights are mostly limited to fun/thrilling regular-season wins in games that (at the end of the year) mattered little in the larger picture. Notre Dame and USF 2007 being the exceptions to the rule.

I don't know exactly where I planned on going with this little intro. I wanted to somehow tie all that back in with the fact that this afternoon's Papajohns.com Bowl against South Carolina is probably the best matchup in UConn's abbreviated bowl history (only Wake Forest in 2007, a very solid team, comes close).

I suppose my point was this game is kind of a big deal. The 'Cocks are a very respectable SEC opponent - they present perhaps the best defense UConn will have seen this season - and since the Huskies rarely face teams with ESS-E-SEE-SPEED, this makes Saturday's game a very interesting as a curiosity.

Or maybe my point was that, with each passing season, UConn is gradually settling into its new spot sitting at the (relative) big-boy table. Playing MAC teams in bowl games smacks of small-time football. Today's game, against a solid opponent on national TV on the day after New Years', is simply more important than the International Bowl or the Motor City Bowl. So long as the college football season's ultimate conclusion is a series of random bowl games, all we can ask for UConn is a evenly-matched bowl opponent with enough cache so that a win means something.

South Carolina, I think, is 2-for-2 on those counts.

So yes, the Papajohns.com Bowl is a meaningless bowl game that only the most hardcore college football fans will watch, played after a four-week layoff from the regular season, in a drab stadium in Alabama.

But damn it, I want that trophy.

On with the preview, which I swear includes the bare minimum of 'Cock jokes. I'm saving those for the instant reaction postgame.

Birmingham, of course, is home to UConn's own Stanley Robinson. I'm told (not making this up) that Sticks was planning to attend the game, only to find out that he needed to be in Hartford to play Notre Dame.

State of the Huskies: It's been a while since we discussed the football team in depth.

When last we left the Huskies, they were on a three-game win streak that left us feeling all nice and warm. The days of losing every week in the most ridiculous and agonizing ways are over, damn it! The last of the three, the snowbound last-second field goal win over USF, clinched the Papajohns.com Bowl bid and gave the Big East record a nice, cosmetic finish.

Now, I'm convinced that we're winning the Big East next year (you may be aware of such a Twitter tag), but a bad performance against a middle-tier SEC team could make that chatter sound ridiculous.

The redshirt seniors in the group graduated from high school in 2005, which is when I graduated high school. Pretty much all college football players are now younger than me. Good lord is that depressing.

So, tell me a little bit about the Gamecocks: I admit to my only-cursory knowledge of South Carolina football. Luckily, we were able to find a voice from Gamecock country to educate us. For that, I refer you to our Q&A with Garnet and Black Attack from earlier this week.

South Carolina appears to be a very similar team to UConn. Youthful - just nine seniors, second-fewest in America - and middling. The 'Cocks were wedged right in the middle of the SEC, one of nine teams to finish between 3-5 and 5-3.

Unlike UConn, South Carolina got off to a great start in '09 - 5-1, dropping a shootout to Georgia in the second week of the season - before tailing off. Fairly close losses to Alabama and Florida are of course not that bad, but the Gamecocks' swoon also included throttlings at the hands of Tennessee and Arkansas. Only a four-point win over Vanderbilt kept the 'Cocks afloat heading into the season finale against hated rival Clemson.

In that game, Stephen Garcia threw for 126 yards and three touchdowns, the Gamecock defense held Clemson to 260 yards, and USC stomped something of a mudhole in the Tigers.

As a result, South Carolina's feeling pretty good about their team, as our Q&A revealed.

Most interesting factoid from the South Carolina game notes: the Gamecocks only have seven eight-win seasons in their history. Amazing, especially when you consider that UConn has had four in its first decade (and attempting to reach #5 today) of I-A football.

Check out the game notes: South Carolina’s are here.

UConn, apparently, does not have game notes up on their site anywhere. However, you can get all the info you need at UConnBowl.com.

I assume that you can get the rest of your need-to-know South Carolina info at CocksInABowl.com, but I'm scared to type that into a browser.

The preview: There are two things that worry me about this game.

The sophomore quarterback has had a fine year (after a rough start in the season opener against NC State), and appears to be the man in Columbia for the forseeable future. Garcia has piled up four 300-yard games, and he will almost assuredly find holes in UConn's suspect defensive backfield.

UConn needs to contain the big passing plays and force South Carolina to grind out long drives. The hope is to just hold them to field goals and hope Frazer and Dixon can respond with touchdowns.

Statistically, South Carolina doesn't have much of a running game, but I would think they'd want to at least try to run on UConn's undersized defensive line to draw defenders up.

If not, it's not as if UConn is known as a blitzing team, anyways. Garcia will likely have lots of time to pick apart the secondary barring the super-monster version of Lindsey Witten showing up.

Basically, South Carolina should score a lot of points unless UConn's defense ate their Wheaties over the month-long break.

Eric Norwood will be a name you hear often tomorrow, as the linebacker is South Carolina's career leader in sacks and tackles for loss. Three of the four gentlemen starting on the defensive line are rather large (280+ pounds).

UConn's offense, while improved (now with 35% more balance!), needs to pound the Cocks' (heh) defensive line with Dixon and Todman to set up Zach Frazer.

The offensive line (especially the tackles against Cliff Mathews and Clifton Geathers) will be greatly tested here, and while I think UConn can score with South Carolina, it will depend on how well the O line matches up with their D line.

Those are my fears.

I'm confident in Zach Frazer. We've all seen how he's gotten better throwing the ball with accuracy with every game. With a month of practice under his belt, I'm anxious to see if we get one more good performance out of Frazer before we head into the mother of all quarterback battles this spring/summer.

I'm confident in Joe Moorhead. The numbers speak for themselves, and I think Moorhead will put the kids in a position to make some big plays and hang with Garcia.

And I'm confident that Edsall will have them ready to compete with a team on their level.

In the end, the formula for victory in this game is probably unchanged, just as it has been for every UConn game since the start of 2007: get out to an early lead, force a turnover or four, grind out a victory. I have a good feeling about this game...I think UConn's going to get it done and put a nice cap on what has been a painful season.

And then we can move on (hopefully) to a day when we'll no longer need that formula.