Share All sharing options for: Q&A: The Feathered Warrior of Garnet & Black Attack 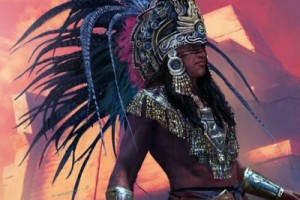 So, that hideous, atrocious, nonsensical call in that UConn-Cincinnati game last night made me angry. Angry enough to hit someone.

Speaking of being angry enough to hit someone, football! (Nailed that segue.)

This Saturday is one of the few times that the football, men's basketball and women's basketball teams will all be in action. And since we've shamefully neglected the rather interesting Papajohns.com matchup with South Carolina, we thought now would be a good time to get on that.

Helping us out in that endeavor is "The Feathered Warrior," one of the writers over at South Carolina blog Garnet and Black Attack. He was kind enough to put up with my tomfoolery and answer my questions regarding the Gamecock program, and the answers are worthy of a man called "The Feathered Warrior."

You can check out my responses to his questions, including the best Gamecock joke I've yet come up with, here.

Below the jump, learn all about:

And, of course, make sure to check out Garnet & Black Attack for more coverage of Saturday's big game.

KM: I grew up being in awe of Steve Spurrier when he was the coach at Florida. Obviously, he hasn't led South Carolina to that same success yet, but I'm interested to get a view from the inside - what's your assessment of the Ol' Ball Coach? Can he make South Carolina a team that contends for SEC championships every year? (To me, anyway, it seems like every year South Carolina is hovering around that 7-5/8-4 mark.) What does he do well? What does he need to work on?

TFW: The answer you’ll get to this question depends on who you ask – and when you ask them. Those of us over at Garnet and Black Attack tend to be pretty happy with Spurrier. Now, that’s not to say that we’re satisfied with 7-5 or 8-4 seasons ad infinitum, but we see where our program is as a whole compared with where it was prior to his arrival and the trend is decidedly positive.

Before our win over Clemson, Spurrier’s tenure at Carolina was beginning to come into question. All signs pointed to a third straight "late season skid," but with so many freshman in our lineup this wasn’t altogether unexpected.

Then our beloved ‘Cocks pulled off the upset in convincing fashion and all of the sudden things are feeling pretty damn good around here.

To be sure, Spurrier’s offense hasn’t caught fire like we all had hoped prior to his arrival. Then again, the challenge of bringing South Carolina to annual championship contention in the SEC is an uphill battle.

College football has adjusted some since Spurrier’s days at Florida, but we’ve seen signs that he can still get the job done. Last season, and to a lesser extent this one, we had receivers open all over the place without a quarterback who could hit them.

This year Stephen Garcia has made tremendous strides in his game and its beginning to pay dividends. I think most people would agree that our offense’s biggest problem over the past 5 years has been the offensive line. We hoped to finally address this problem this year with the hiring of stud coordinator Eric Wolford, but he just left to be the head coach at Youngstown State.

Depending on who we get to replace him and if our massive o-line class this year stays on, we’ll hopefully get this situation sorted out sooner than later. We’ve got a solid nucleolus of very talented and very young players. Couple that with the changes going on elsewhere in the SEC East right now, and I fully expect the Gamecocks to challenge for the SEC Title in the next 2 years.

KM: Stephen Garcia is just a sophomore, and he's put up some very impressive numbers. Is the sky the limit for this kid? Is he a product of Spurrier's system?

TFW: Stephen Garcia is an enigma wrapped in a riddle, soaked in mystery. This is actually his third year learning Spurrier’s offense, so "sophomore" is a bit of a misnomer. He enrolled at USC early as the second best dual-threat quarterback in the country. However, he missed his first two spring practices due to off the field issues, and his debut as "the guy" in last year’s bowl game against Iowa left much to be desired.

This year, though, he has shown marked improvement. He seems to be going through his reads well, he’s making good decisions with the ball, and he’s shown the kind of leadership that this team will need to succeed in the future. Whereas before he would take off out of the pocket at the first sign of trouble, Garcia is now demonstrating a deeper understanding of Spurrier’s system.

Lord knows that Garcia has the physical tools to be successful in the SEC, but up until this season it was still very much in question whether he would let those God-given abilities go to waste. He appears to finally have his head screwed on straight. Seriously, watch out for this kid next year. (Interesting Garcia fact: he has a son, Memphys, named after the character from Happy Feet.) 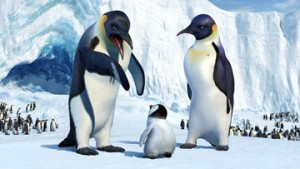 KM: I've been very impressed with the Gamecocks' defense this year when I've seen them play. What should UConn fans expect from the USC D (sidenote: it still feels weird to refer to "USC" and not be talking about that team from California), and which players do you expect to make an impact?

TFW: Eric Norwood (LB). This kid is truly the heart of our defense. You’ll see him make plays in space, rush the quarterback, block kicks on special teams, recover fumbles, and make interceptions. He has an uncanny ability to be around the ball. Having a sack, interception, and a fumble recovery all in one game would not be an unusual line for him.

Also watch out for Cliff Mathews (DL). If you’re an old school cat who likes players who never quit on a play, Cliff Mathews is your man. Stephon Gilmore is our true freshman corner who Steve Spurrier says might be the most gifted athlete to ever put on a South Carolina uniform.

As for your inner turmoil regarding "USC," consider:

You decide who the "real" USC is. 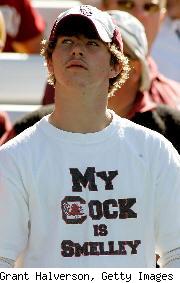 Plus, Southern Cal could never market shirts like this.

KM: I harp on UConn fans because they're...well, they're not great at this football thing yet. Back when we started out on the I-A level, we actually sent out representatives to steal learn about other teams' gameday traditions.

Talk about gameday at Williams-Brice Stadium and what kind of traditions your fanbase has. UConn fans can use all the pointers we can get.

TFW: Our most famous tradition would have to be the playing of the theme from 2001: A Space Odyssey as our team enters the field. It’s hard to put into words, so just take a look at this YouTube clip.

Gives me chills just thinking about it…

The last song the USC marching band plays at every home game is "Amazing Grace." It’s deeply moving and a subtle reminder in the football-crazy South that opposing fans share the common thread of humanity once the final whistle blows. I highly recommend that you stay around after the bowl game to see if they play it.

Cocky is perhaps the greatest mascot in all of college football. He’s brought home a few Capital One Bowl Mascot Challenges for us, and Carolina fans absolutely love him.

Before the game begins, take a stroll around the parking lot and make some new friends. Any fan worth their salt will not only have a full tailgate spread complete with BBQ and booze, but they’ll more than likely invite you to join them.

KM: I get the sense that SEC football fans look down on the Big East because the conference doesn't generally have teams contending for the national title. I was wondering what you thought of the Big East as a league. If you've seen any UConn games this year, feel free to add any thoughts you have about our beloved Huskies in particular.

TFW: I have to be honest, grad school has prevented me from watching too much football outside of the SEC this year. I’ll speak to SEC fans’ perception of the Big East in general, though.

You’re right, when it comes to football we pretty much look the other way when the Big East comes up. Personally, I don’t think the Big East has as much depth as the SEC. I would put your best teams (UConn included) (ed.: Ha!) on par with our second-tier teams.

The lack of a national title contender probably does hurt you in the eyes of most SEC fans. But just because I think your conference might not be as prestigious at the SEC, please don’t infer that I think your team is inferior. I fully expect two evenly matched teams to slug it out on January 2.

KM: I'd be remiss as a UConn blogger if I didn't ask about basketball. How are the hardwood Cocks (heh, heh) looking? And do the fine people of South Carolina care about hoops?

TFW: South Carolina actually used to be a basketball school, believe it or not. Back when we were a member of the ACC we would regularly pack the house to take on the likes of UNC and Duke. I think we actually own a winning record against UNC.

As the story goes we left the ACC because the league kept screwing us – something about recruiting and conference championships, I dunno, ask my dad.

Anywho, once we went independent the quality of hoops at USC took a nose dive. Right now, though, we’re all pretty stoked about the arrival of Coach Horn and the direction he has our program going. We actually had a few sellouts of our 18,000 seat arena last year – a pretty remarkable feat considering we didn’t even make the NCAA tournament.

Our team was looking pretty good this year before we lost two starters to injury. However, Devin Downey can hang with anyone in the country in terms of skill and poise. We’ve also got some talented true freshman (Lakeem Jackson and Ramon Gallaway). It will be tough, but I think we’ll have a shot at the tourney if we can get Mike Holmes back and the team starts to gel.

TFW: At 7-5, both of these teams feel pretty similar. It seems to me that USC has more NFL caliber talent, even if it is young talent. However, UConn has momentum in its favor, and it’s hard to beat a team that is clicking on all cylinders.

Thanks again to the Feathered Warrior, and best of luck to the 'Cocks on Saturday.