On to the real season: #10 UConn at Cincinnati preview

Share All sharing options for: On to the real season: #10 UConn at Cincinnati preview 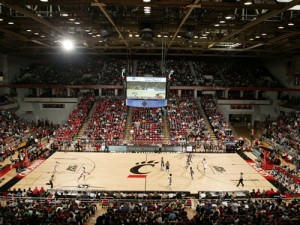 Cincinnati basketball at Fifth Third Arena: 167% excitement, 100% of the time

Well, 2009 is coming to an end a lot quicker than we thought. In the dual tradition of hacky internet writers (listing all of the great things about the previous decade at the end of said decade) and this blog (doing what hacky internet writers do, only with more procrastination), we'll have some kind of 2000s UConn sports wrap-up over the next week or two.

In other blog housecleaning news: check back tomorrow and Friday as we break the code of silence surrounding the PapaJohns.com Bowl. We'll have a Q&A from the Feathered Warrior from South Carolina blog Garnet and Black Attack, and then the game preview to get you set for Saturday's 2 p.m. kickoff.

In the meantime, Coach Cal's men have one more piece of business in the Aughts: they open up Big East play at Fifth Third Arena in Cincinnati tonight (so-named because five out of every three people think that's a dumb name for an gym).

Cincinnati is a fairly dangerous squad that should be an NCAA Tournament team in March. You know they'll be anxious to knock off a top-10 team that may or may not belong there. Below the jump, we'll take a look at tonight's matchup, which will decide once and for all who is the best UC in the Big East. Unless UConn loses.

(Also, the real world will be taking me away from tonight's game, so I will be unable both to 1) watch it or 2) run TheLiveBlog. If there's no LiveBlog, feel free to use this post for your in-game thoughts.)

The place: The Big Fraction, Cincinnati

UConn won the first matchup between the two teams, 96-91 in the second round of the 1995 NCAA Tournament.

The notable game in the series came in January 2008, when UConn came back from a 12-point deficit late in the second half. A pair of A.J. Price free throws with 9 seconds left gave the Huskies an 84-83 win.

Then, in a weird game that no one remembers, UConn beat Cincy 96-51 in that season's finale because the Bearcats were late getting into Storrs due to a snowstorm.

Hey, I watched that game!

State of the Huskies: Things are looking better than they did a week ago. The rotation seems to be set at a solid eight players and, as if to make that point ever more explicitly, Charles Okwandu and Darius Smith remain in Storrs because they're enrolled in winter intersession classes. And their narc professor totally won't let them copy the lecture notes. Not cool, man.

Only nine scholarship players will be eligible - and Jamaal Trice the only one to play fewer than 11 mpg in the last five - so it will be important to stay out of foul trouble tonight. That means you, Gavin/Ater/Uruk Hai.

Anyway, as for that 8-man rotation: I kind of like the team as constructed.

Walker-Dyson continues to be one of the best 1-2 punches in the Big East, and D-Bev is a capable Austrie-like backup with a nice jumpshot; the three post players listed above can surely hold their weight with most teams; Sticks is now getting dangerously close to being a reliable source of production (last three games, points/rebounds: 26/5, 14/12, 29/5); even Tuff McJuice is getting in the action, averaging 10.5 ppg in the last two games.

The win over Iona was impressive, and probably UConn's second-most comprehensive win (behind the LSU bludgeoning in the pNIT) this year. Good signs. Now do it against a Big East team.

So, tell me a little bit about the Bearcats: Historically, the Bearcats have been a very good program. Under Bob Huggins, Cincinnati was regularly in the top 10 and one of the dominant teams in Conference USA.

But since the Big East ruined Conference USA by taking all the good teams in 2005, the Bearcats have struggled. They've never made the NCAA Tournament out of the Big East, and their highest finish in conference play was a 9th-place finish in '06. (You may remember them as the very first victim of Clown McClownerson's run in MSG).

Perhaps part of the reason his scoring down is due to Lance Stephenson. The 6-5 New York City freshman is leading Cincy with 12.5 ppg and is second on the team in assists (behind Vaughn) with 2.9.

The Bearcats have balance up and down the lineup - Yancy Gates is the second-leading scorer (11.1) and leading rebounder (6.6 per), and sophomore Dion Dixon has provided a lift recently, as Cincy stagnated on offense against Lipscomb and Winthrop.

Cincy made a nice run in the Maui Invitational, beating Maryland and Vanderbilt before falling short in the championship game to Gonzaga by two points.

Other notable results: a bunch of wins over nobodies, a thrilling double-OT loss to Xavier, and a puzzling 17-point loss to an apparently-good UAB team.

Check out the game notes: UConn's are here, while Cincinnati’s are here.

Newbie Cincinnati blog UC Bearcats Blog has your statistically-inclined preview, and a look at UConn from the outsider's perspective, both of which I always appreciate.

Sox & Dawgs has your roundup of other preview pieces that I chose to ignore.

In addition, the Courant's Mike Anthony spoke with Kemba Walker, and I will link to anything about Kemba Walker. In this edition, we learn that Kemba enjoys chicken fingers and thinks Lance Stephenson is aight.

The preview: The best part about the start of the Big East season is that I can finally stop fretting over "margin of victory" and "style points". After this point, it doesn't matter that a one-win Colgate team hung with UConn until the last 10 minutes, or that Harvard and Central Florida came uncomfortably close to springing an upset. All that's water under the bridge. In the Big East, you take every win you can get.

That being said, I think UConn should have the advantage tonight.

The Bearcats are quick and athletic, but they're not very big. With only two players taller than Stanley Robinson, it'd be nice to see Edwards and Oriakhi get touches down low.

The guard matchup is about a wash (assuming Dyson guards the taller Stephenson), assuming Kemba doesn't toss in a 1-for-10 stinker like against Maine.

If UConn doesn't let Cincinnati get out to an early lead and they can keep the Big Fraction crowd in check, they can certainly pick up an important conference road win. As will be the case for the remainder of the season they'll need big performances from at least two of the big three and a little bit from everybody else.