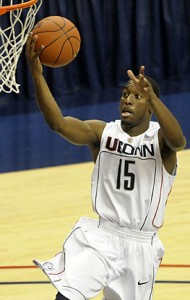 Kemba Walker fears not Gaels he fears them not.

After what I'm sure was a wonderful Christmas break for you and yours, the UConn men return to the court to resume their new tradition of struggling with half-decent mid-major teams.

This afternoon (more specifically, 2 p.m. on ESPNU), the challenge comes from an Iona team who has been a thorn in the side of several major programs (and Providence!) already this season. The Gaels are 8-4 with close losses to Florida State and Baylor, and a win over the aforementioned Snuggies from Rhode Island.

For UConn, this is the final game before conference play starts Wednesday night in Cincinnati, and thus the last time we can complain about lackluster play for "OMG we're going to be terrible in Big East play if we play like this!" reasons.

Kemba Walker had a terrible game (1-for-10, though he also had nine assists) against Maine, just to see what that felt like. Tuff McJuice played 17 minutes and scored 8 points against the Black Bears, both of which are good signs.

The rotation seems to be rounding into shape just before the Big East season. The starting lineup of Walker-Dyson-Robinson-Majok-Oriakhi seems to be set in stone, and Edwards is going to play 20+ minutes every game off the bench. Tuff McJuice and D-Bev seem to have solidified themselves as regular contributors. This is a flawed team, but at least Coach Cal may have found out who he can go to war with.

Oh, and as for today? Iona actually frightens me. They're one of those pesky mid-majors who can play, even if they don't have near UConn's talent level. I'll predict they lead at some point in the second half, and they keep it close until the under-8 timeout. Then, UConn pulls away and I get really discouraged thinking about Deonta Vaughn and Lance Stephenson lighting up the Huskies on Wednesday.