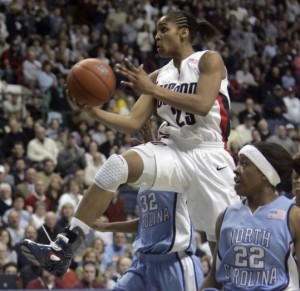 If Maya Moore were to sign with the Knicks this offseason instead of LeBron, I think I'd be OK with it.

As TheUConnBlog's Ambassador to Women's Basketball, I'd be remiss if I didn't write even a short preview of tonight's epic* #1-#2 matchup between UConn and Stanford.

It's at the weird time of 5 p.m. on ESPN2, since I believe everyone working in Hartford has off for Festivus. I imagine I'll be frantically Twittering away during the game, marveling at all the good fundamentals (and/or being in shock that a team with "UConn" on the jersey can run a competent halfcourt offense).

I imagine women's basketball is probably not enjoyed by much of the blog's target audience, but hell, if you were ever going to pay attention, tonight would be the night. It will likely be one of the three or four times any team could conceivably test UConn for more than a half.

Here's what you need to know (or everything that John Altavilla couldn't fit into his Courant preview):

*If you like UConn winning games against the next-best team in America by 15...which I do.

The UConn women have won their last 48 games, all by double digits. They won 39 games last season en route to the team's sixth national title, and the closest any of the NCAA Tournament opponents came was 19 points (Arizona State in the Elite Eight and this Stanford team in the Final Four.)

Almost everybody, save All-American PG Renee Montgomery, is back from that unbeaten team. What makes this UConn team even more unfair is that not only does Geno Auriemma have the two best players in America (center Tina Charles and small forward/female-LeBron-James Maya Moore), but he also has two of the best sophomores in America (Caroline Doty and Tiffany Hayes) and a bench filled with top five-star high school recruits-turned-role players.

For some perspective, imagine if Jim Calhoun had been able to recruit Ben Gordon, Ray Allen, Emeka Okafor and Rip Hamilton, only they all played on the same team. And all but five or six of UConn's competitors were all Ivy League-level teams.

Their average margin of victory in their nine games this season is over 45 points per game. Only Texas, a team ranked in the top 15 at the time, has managed to even break 50 (they've played UConn the closest of any team, losing 83-58 in a neutral-site game in San Antonio). Some will say that UConn hasn't played anybody else, and they'd be mostly right. Though in fairness, the scores could be a lot more lopsided, since most of the starters are averaging around 20 minutes per game.

Stanford, at least, is one of the few teams with enough talent to challenge UConn.

The Cardinal are the last team to beat UConn, which they did in agonizing fashion in the 2008 Final Four (back when I was merely an amateur amateur blogger, as opposed to a mere amateur. UConn returned the favor with an 83-64 win in the '09 Final Four, which wasn't even that close.

The Cardinal have the size to compete with UConn - Jayne Appel and Kayla Pederson could be the best 1-2 punch at the 4-5 spots in America. And Stanford did handle #3 Tennessee (yeah, they're back to being good again. Pat Summitt remains surprisingly shrewish, though.) the other night, and they've looked impressive against a much more difficult schedule than UConn has faced.

I would be shocked if UConn lost the game, but unlike the other games this year, the range of victory is probably 5 to 15 points, rather than 40 to 6,000,000. But my curiosity is piqued. I don't necessarily think that this UConn team is yet better than last year's team (though in truth, I've only seen the Texas game), but tonight should be a good indicator.

If there's one reason for you cynical types to watch, it would be to find out if you need to tune in the rest of the season. A double-digits win over (by far) the #2 team in the country would mean that the rest of the season will be a fun, stress-free romp to the all-time women's basketball win streak record (70, currently held by the 2001-03 teams, which would fall in the Big East semifinal game March 8). A loss would make things slightly more interesting, in that Geno National Championship Part VII wouldn't necessarily be a foregone conclusion. Just extremely likely.

And if there's a second reason to watch, it's that Maya Moore is totally badass.