I didn't remember the Maine (game), and other concerns

Share All sharing options for: I didn't remember the Maine (game), and other concerns 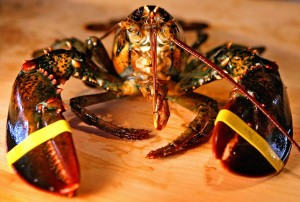 As it turns out, UConn has another game on its hands tonight, 48 hours after yet another underwhelming victory over a mid-major, this time 60-51 over Central Florida on Sunday.

I had completely put this game out of my mind, since it's just Maine, so I don't have much in the way of preview materials (I refer you to UConnHuskies.com's surprisingly informative GameDay Central feature or the Courant preview).

I do, however, have an ever-growing list of concerns going forward with this team.

And since Porter homered it up over the weekend, I thought I'd give you the ying to his yang (yang to his ying?).

Negativism, below the jump.

Now, of course last year's Final Four team looked about as mediocre as a #2 team could look at this point last year (remember Buffalo having a chance to tie or win with 10 seconds left? Or the hideous Georgetown loss?). Contrary to Porter's post, I do trust the coach. His teams get better during the season because, after three months or so, his system clicks and everyone tends to play as one well-oiled machine. 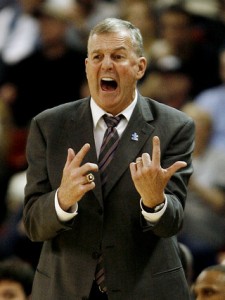 Angry Jim is angry about being down 9 points to UCF in the second half.

But with the caveats that a.) no UConn team ever looks good in December as compared to February (except for the awful 2006-07 team); b.) some of these problems could take care of themselves; and c.) I'm a negative nancy spoiled by last year's success, I'd like to bring up three main points:

Having four veteran scoring options is good, except that not all four will show up in a given game. Sunday, it was just Jerome Dyson (and only from 3...he shot an abysmal 1-9 from inside the 3-point line to go with five turnovers. More on that later) and, in the second half, Stanley Robinson. They scored 42 of UConn's 60 points, and Kemba and Gavin added a meager 13 more. Five points from the rest of the lineup (a 3 from D-Bev and a single free throw each from Majok and "No Nickname" Smith) isn't going to get it done.

The freshmen are having difficulty adjusting to the Calhoun NBA-style offense, and they're probably also terrified of incurring his wrath by taking a bad shot (Majok's "Get-The-Fuck-Out-Gate" being just the most obvious wrist-slapping). So we get games in which Alex Oriakhi plays 24 minutes and takes one shot.

Tuff McJuice has been disappointing so far, especially since we went to the trouble of figuring out a nickname for the guy. Majok, who did a great big bowl of nothing Sunday, remains a question mark until he makes a field goal or two.

Man, it'd be nice to get some, any bench contributions that aren't from Gavin Edwards (and calling him a bench player is just accounting trickery).

It's terrible, unless it's coming off a turnover and leads to a Sticks alley-oop dunk. Not to say it can't get better as the youngins figure out what they need to do, but it's going to continue to look ugly until that happens, because UConn has no jump-shooting threat that other teams need to stop.

Jerome Dyson is what he is at this point, an inefficient scoring guard with a good handle, who will pass up an open jumper nine times out of 10 to drive into traffic near the rim. He'll make about 35% of his 3's, get to the free throw line a lot (he's made 72% this year, right around his career average) and turn the ball over four times a game. He's a valuable player, for sure - he's still the best guard defender UConn has - but he's also flawed. After four years, he never made the leap we expected of him.

Kemba's been solid, and at times has shown flashes of being the Big East first-teamer we think he can be. Not many complaints, though he is often out of control. I would like to see him shoot more, as his shot appears to have come along nicely during the offseason.

Sticks remains a hustle player who will get his points on offensive rebounds and transition (and the occasional 3), but he's just not going to take over games like a traditional UConn wing player.

Gavin's been good. Can't complain about what we're getting from him.

These four guys are good players, and could all be contributors to a championship-level college basketball team. If they had some help, UConn would look a lot better than it has. But they don't, so the flaws are magnified. I'm willing to be convinced otherwise on any of these assessments, but that's what I see.

UConn ranks in the bottom third of the Big East in turnover rate, because teams can huddle around the basket, move into passing lanes, and force the UConn guards to either drive into traffic and shoot a long jumper (usually the former).

Having no consistent mid-range and long-range threats (averaging 10 3-point attempts per game would, I believe, be some kind of absurd low point - even last year's team, not exactly full of J.J. Redicks, averaged 15) effectively eliminates the post players from the halfcourt offense. And that forces the guards to go crazy trying to create offense.

Now, will they get better once Big East play starts? I'd wager yes, though I have nothing but faith in Coach Cal to back that up. UConn plays defense pretty exceptionally well and, despite the counting stats, is rebounding the ball pretty well.

But it's worriesome to see UConn turn every early-season patsy game into one of those narrow 5-12 first-round NCAA Tournament games. I'm cautiously pessimistic about my 25-win prediction, since that would require (if we assume three more non-conference wins and three postseason wins) 12 Big East wins.

So please, all I ask is that UConn blows out Maine tonight and I'll start to get more excited for the real season.