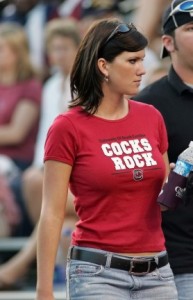 Giggling Connecticut schoolboys are already calling this the best bowl game ever.

Thanks to the wonder of Twitter, and UConnReport.com, we've learned that UConn will head to the Papajohns.com Bowl in Birmingham, AL. The game is January 2 against an SEC opponent (likely South Carolina).

1) It's in prime bowl season just after New Years' Day, as opposed to the way-too-early St. Petersburg Bowl (during UConn's final exams)

2) It's against an SEC team, as opposed to yet another MAC pushover (International, Motor City) or a repetitive ACC team (Meineke)

3) We're likely going to play South Carolina, giving us a month's worth of immature and shameless Gamecock jokes.

EDIT: As if all that wasn't good enough, senior WR Brad Kanuch cuts to the heart of why we're all happy about the Papajohns.com Bowl: