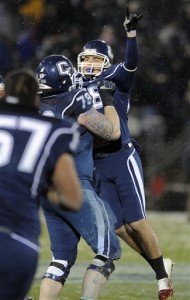 Now we're only minus-two in the "horrifying-defeats-to-exhilarating-wins" category.

After yet another fourth-quarter defensive collapse, UConn was staring loss #6 (and a 2-5, 6th-place Big East finish) right in its ugly, metaphorical face.

Then David Teggart stepped up on the wet, snow-covered turf at Rentschler Field. As you may or may not know, UConn kickers have sort of sucked for as long as life has existed on this earth. (It's how we lost those nailbiters to the coelocanths and trilobites way back when.) Matt Nuzie begat Graig Vicidomino, who begat Tony Ciaravino, who begat Dave Teggart. Each one has their own special legacy of absolute frustration and comical ineptitude.

Nuzie inspired a 'cross your fingers even for extra points' thing in the student section. No one even remembers Vicidomino (admit it: you had to look him up to make sure he actually played). Ciaravino missed 17* field goals in the 12-10 loss to Rutgers last year. Teggart missed two crucial kicks against WVU and another potential game-winner against Notre Dame this year.

But finally, mercifully, thankfully, happily: with five seconds remaining in this season from Hell, Teggart stepped up on that moist sod on a cold East Hartford night and drilled that sonofabitch ball. Forty-two yards, straighter than an arrow, guided by nothing more than gravity and hope.

After 12 games, most of them tense beyond belief, this UConn team arrived at its destination. Along the way they lost a teammate and broke their fans' hearts weekly. But they also showed great resolve and heart, and became one of the most poignant stories of the college football season.

It's tough to tell the story of the 2009 UConn football team with numbers (though we certainly will do so when we get around to our 2009 wrapups and 2010 previews). Not when they lived on the thin line between victory and defeat week in and week out. Not when, had five plays in five games gone differently, UConn could be sitting here tonight 12-0 and holding righteous anger against the overlords of the BCS.

Perhaps it's a good thing that 2009 turned out like it did (I mean on the field, obviously). UConn's 7-5 record, despite all the close losses, just feels right.

While we discovered that we have some offensive weapons - and the right guy calling the plays - we now notice an obvious inadequacy on defense that must be addressed. Indeed, the imbalance between offense and defense has been, to paraphrase Missy Elliot, put down, flipped and reversed.

It seemed certain that UConn would remain an no-offense, all-defense team for as long as Randy Edsall remained here. Now, we have seen the transformation. We have seen that offense - real, live offense! - is possible at UConn.

If UConn is to take the next step in 2010 - and I believe we will - it must find a way to replace the production of players like Lindsey Witten, Andre Dixon and Marcus Easley (and, hell, Desi Cullen). Edsall must come up with a way to plug the defensive leaks that came unplugged so often this season. (It goes without saying that, if UConn is going to be as good as I think, Edsall must stay in Storrs and resist the temptation of South Bend or Lawrence or Charlottesville).

How good can UConn be? I refer you to this Twitter hashtag. No, seriously. This team can be really, really good next year. (It can also very easily stumble back to medocrity, but shut up.) I'm rather stoked to talk about the QB position battle, to find out how good the O-line will be with Jimmy Bennett, to figure out if any receiver can make the Easley leap, even if I'm worried about the depth on defense.

I'm even excited to see how many more trick two-point conversion plays Edsall can pull out of his ass. (A play-action fake into a fake Statue of Liberty handoff into a pass to a wide-open receiver in the end zone? Guh?)

But those are concerns for April and August.

Tonight we reflect on a 7-5 team that probably deserved better, but ultimately ended up exactly where it needed to be to keep the program's positive momentum going.

No matter what happens in the bowl game, I have a sense that we'll look back fondly on this team, whether it turns out that 2009 was the launching pad for the 2011 Orange Bowl squad, or simply another in a long line of middling UConn football teams.

The journey to get to 7-5 was often compelling, occasionally joyful, frequently discouraging and at times downright cruel. It will be alternately remembered as "that season when Jasper Howard was senselessly murdered," "that season with all those close losses" and "that season when UConn beat Notre Dame," in that order.

But at least it ended the right way.