Share All sharing options for: Winter wonderland: USF at UConn 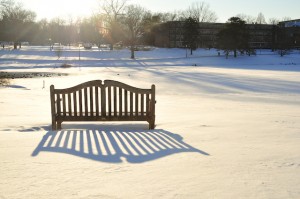 Snow on the Storrs campus. Not today's snow, though. This is a misleading stock photo. Sorry for the confusion.

Roughly three months ago, I concluded our Football Preview Weekish by predicting a 7-5 record for our beloved Huskies. By my watch, I had UConn 6-5 coming into the final game with South Florida (missing on both the incomprehensibly crushing loss to Rutgers with the exceedingly more awesome Notre Dame win). We're exactly on schedule.

Tonight, UConn closes out one of the most difficult regular seasons of any football team I can remember, on and off the field. Jasper Howard's murder will unfortunately always be the first thing we think of when we think "2009 UConn football". And the Huskies arguably could have been 11-0 at this point, but things went awry at the exact wrong moment in each of UConn's five losses.

I wouldn't wish a season like this on anybody (though the Notre Dame win at least salvaged my sanity), and I will be thankful when it's over.

You (or other interested fans who remain alive after the SEC armageddon game) can check out the Huskies welcoming South Florida to cold, snowy Rentschler Field for an 8:00 ABC game. (For those of you not in Connecticut or New England, the game is on ESPN2.) UConn has a chance to finish the regular season almost exactly where they were predicted to - 7-5, in a tie for fourth place in the Big East.

To do that, they need to contain the sun-soaked athletes of South Florida - and they need to do so without MLB Greg Lloyd, who's done for the season (and spring practice) with an ACL. Luckily, Mother Nature appears ready to help in the form of frigid, wet weather the likes of which Floridians aren't used to.

This is the perfect game for the Randy Edsall Offensive Machine - expect heavy doses of Jordan Todman and Andre Dixon all night, and expect UConn to try a long play-action pass exactly once.

Because USF always tends to fold down the stretch, and because of the weather, and because UConn's got a nice little two-game win streak going right now, it almost feels as if this game is a foregone conclusion. Not so fast. The Huskies will have to dominate the line of scrimmage as they've done so often this year, and they will need to contain USF's budding superstar QB BJ Daniels when he gets outside of the pocket.

If UConn does those two things, it gets its third straight win, a respectable finish to a nightmare season, and a nice bowl berth in Birmingham or Toronto. And then we will launch the "UConn: BCS or Bust. No, seriously." campaign in January.