This is it: UConn/Duke preview

Share All sharing options for: This is it: UConn/Duke preview 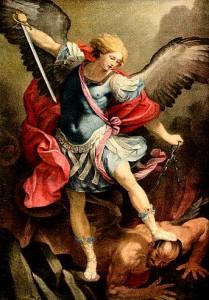 UConn vs. Duke, in which the role of St. Michael the Archangel is portrayed by UConn and Duke plays its traditional role.

Well, here we go, the matchup that everyone wanted as soon as the NIT Tip-Off bracket was released. As I wrote yesterday, it is strange to see UConn and Duke taking the court in a game that means very little in the long run. Still, they appear to be two well matched teams and this will be a fantastic test of just what UConn is working with this early in the season. Will tonight's UConn squad looked like the group that struggled with Hofstra, Colgate and William and Mary, or will the team that blew the doors of LSU show up? Read on for more.

UConn is attempting to win its first preseason NIT title. The Huskies finished third in the tournament in both 1997 and 2003.

The Vegas favorite: Duke, by 3

Series history: Tied at 4-4, but with four of those eight games coming in either the Elite Eight or Final Four. Anytime these two play it is a big deal, a full history of the series can be found here.

State of the Huskies: Cautiously optimistic. UConn destroyed LSU in the garden on Wednesday, but LSU is awful. Still, it was nice to see the Huskies finally put together 40 minutes of play at the level most fans hoped for at the start of the year. Gavin Edwards and the rest of the bigs did a much better job controlling the boards then they did in the first week of the season and Stanley Robinson put in his fourth straight good game. AHHHHH!

So, tell me a little bit about the Blue Devils: Duke cruised in its first four games, but struggled to get past ASU on Wednesday night. Like UConn, Duke relies on strong guard play and is not necessarily a power in the post. Unlike UConn, Duke is not very athletic, so it will be interesting to see how they try to contain the trio of Kemba Walker, Jerome Dyson and Robinson.

Check out the game notes: UConn's are here, while Duke’s are here.

Media matters: Plenty of media attention for this one, mostly focused on the history of the series and "two teams searching for their identity" angle.

The Courant's Mike Anthony runs through the series history and points out the obvious: If UConn plays like it did against Hofstra this could get ugly, if they come out like they did against LSU then basketball fans are in for a treat.

The Republican-American leads with the fact that Robinson wanted to play for Duke until he saw the inside of Cameron Indoor, which he thought was too small. Fantastic.

Duke's local paper looks at how the atmosphere and spotlight for tonight's game will provide the Blue Devils with a preview of NCAA Tournament style atmosphere.

The preview: So far neither team has shown that post play is a particular strength so I have a feeling this matchup will be determined by the play of the guards. How will Duke try to contain UConn's athleticism, particularly Stanley Robinson who they do not appear to have an answer for? And how will UConn fare against Duke's battalion of 3-point shooters? As a team, the Blue Devils are shooting 42 percent from beyond the arc and three of their players shoot over 40 percent by themselves. Perimeter defense has never been a strength of the Huskies and if Duke gets hot from outside it could be a long night for UConn.

UConn likely has the edge in the post, especially with Alex Oriakhi holding court down there, but a lot depends on just how well Gavin Edwards plays. If he is able to get close to a double-double like he did against LSU then the I really like the Huskies' chances.

The prediction: I'll just pick two numbers at random without any regard for history.