This does not feel right

Share All sharing options for: This does not feel right 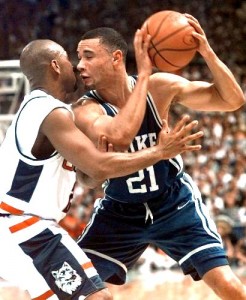 Tomorrow night UConn plays Duke in the championship game of the NIT Season Tip-Off. In theory I should be thrilled. This is probably the best possible early season game for UConn. Its a big time test against a top-10 team that is not exactly strong in the post and if UConn plays the way they did against LSU it is a very winnable game. However, something about the game feels off to me.

The problem is the opponent: Duke. If this were any other team, Kansas, North Carolina, Michigan St., whoever, I'd be thrilled. I love it when UConn plays another top team, especially when both are good, but it is different with Duke. It just does not feel right to play Duke in November.

UConn and Duke have only met eight times before, but there is more history in those 8 games than there is with just about any other UConn opponent. Five of the eight were NCAA Tournament games and four of the five were either in the in the Final Four or to get to the Final Four.

There have been three regular season meetings between the two teams (the most recent was in 1999) and two came in early season tournaments, so this matchup is not without precedent, but the real meat and potatoes of the rivalry comes in March.

The Huskies and Blue Devils first met in the 1964 Elite Eight. The Huskies were coming off a upset victory of Bill Bradley's Princeton squad when they ran into (what I assume) was a more talented Duke squad. The result was not pretty. Duke won 101-54 and UConn would not come that close to the Final Four for another 26 years.

In 1990 the Huskies were in the middle of the dream season, a No. 1 seed and once again had Duke standing between them and the Final Four. Two nights early Tate George had been both late and great, supplying a buzzer beater to sink Clemson, but the Huskies would not be nearly as lucky against Duke. Instead, Christian Laettner sunk a buzzer beater in overtime to give Duke a 79-78 victory.

The Huskies would not have to wait long for a chance at revenge. In the 1991 tournament they upset Shaq and LSU in the first round before dispatching Xavier to set up a meeting with Duke in the Sweet 16. The Blue Devils proved too much, beating UConn 81-67, though Rod Sellers did get to work out some of his frustration with Laettner's head. This was the last time the Blue Devils ever beat the Huskies and thankfully, I am too young to remember it.

The Huskies got their first ever win over the Blue Devils in 1994, a 90-86 victory in the Great Eight Basketball Tournament. But UConn's real payback for the Blue Devils came five years later.

That payback came, of course, in the 1999 National Title game. That year's NCAA Tournament had been dubbed by some as "The Duke Invitational" the Huskies, despite being ranked No. 1 for much of the season were 10-point underdogs to the Blue Devils. Tournaments are not won on paper though, so the two meet in Florida, Trajan Langdon tripped and, in the words of Khalid El-Amin, UConn "shocked the world," winning it all 77-74.

Of course, the two teams had one more Final Four meeting, this time in 2004. UConn once again had the distinct pleasure of ending Duke's season, this time by a score of 79-78. I refer you to this video:

After UConn beat Duke in 1999 I read an essay in Sports Illustrated written by a UConn alum (Leigh Montville?). The author wrote that UConn fans thought about Duke all the time because of all the pain the Blue Devils had caused the Huskies over the years, but that he was not sure if Duke fans ever even thought about UConn. Now that UConn has denied Duke two national titles, I feel confident that Duke fans, even if they might never admit it, know who UConn is and would love to extract revenge. That is the problem with these two teams playing in late November. In just eight matchups, Duke has ended UConn's season 3 times and was a key factor in keeping UConn from the Final Four until 1999. UConn has returned the favor but not once, but twice eliminating a Duke team that would otherwise have won a national title.

I will be rooting hard for UConn to beat Duke, but to me it feels like beating Duke is not enough. There is too much history here. The problem with playing tomorrow is that both teams still have games next week and for the next four months. When UConn and Duke play it is not enough to have one team win and the other lose, when these two teams meet, someone's season should be on the line.