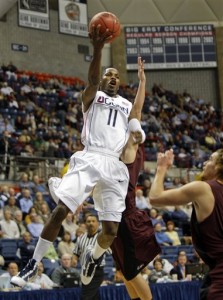 Like just about everyone else I have been on a football high for the past five days, but now with a matchup with LSU at the Garden looming it is time to get back to business. Meacham wrote a spectacular preview of the season already and I agreed with about 90 percent of it, but with the added benefit of seeing UConn struggle in their first three games against mediocre teams allow me to say a few words.

And a brief bit of business: my flight back to New England leaves promptly at 7 tonight, so I will not be around to discuss (or watch) the game, however Meacham says there is a better than good chance that anyone who saunters over here during the game will find TheLiveBlog.

I thought at the time, and especially believe now, that the smartest thing Meacham wrote in his preview was this:

"I think right now, on Nov. 13, the Huskies probably should be ranked somewhere in the 20-25 range, or maybe even unranked, until we see exactly what we’re dealing with."

The guard play has been great. Dyson, Robinson and Walker have each turned in quality efforts and Tuff McJuice (we're making that nickname stick dammit) showed he could hit the 3 (sometimes).

The problem, as I think most feared, is in the post. For the last three years the Huskies have been able to rely on Adrien and Thabeet not just to cover their own area, but also as a wonderful deterrent that kept other teams from attacking the lane. I cannot remember the exact moment but at one point (Hofstra game maybe?) an opposing guard drove along the baseline and into the paint. As I watched it I was sure that whatever pittance of a shot he threw up, there was no way it would get anywhere close to the rim. When he hit a layup for an easy bucket my immediate thought was "the hell?" followed by "oh, yeah, Thabeet does not play for us anymore."

Intellectually I know that the post game changes the second you take out the 7'3" guy, but I have been so conditioned to watching UConn play with that dominant force that instinctively assume it is still there. Obviously they players are still adjusting to this new team, but I wonder if they are experience a similar phenomenon.

The shot blocking is still there (though now it seems to be a shared duty between Stanley, Chuck and Edwards) but the real problem is rebounding. Hofstra and Colgate both out rebounded the Huskies and William and Mary only had one fewer board than UConn. It is obviously still early, but if UConn is getting killed on the boards (Hofstra grabbed 16 offensive rebounds!) by the time the meat of the schedule comes around it will be a long winter.

Alex Orihaki has played well and deserves a lot of credit, but someone else needs to step up and give him a hand. That someone should, theoretically, be Gavin Edwards.

As I have expressed in TheLiveBlog, I have massive reservations about what, if anything Ater Majok can bring to this team. He has not suited up in 18 months, is new to playing ball in America and will be a freshman joining a team mid-season. None of this is good and I still feel burned by Ajou Ajou Deng so I refuse to buy into any hype for a UConn player until I see him on a court. Plus, from most reports it seems like Majok, if he is good, will be more of a wingman/power forward type and not the post presence UConn needs. Okwandu still seems to be a long way away and the lack of any other depth means Edwards is going to be forced to be the man if the Huskies are going to pull it all together and earn their lofty ranking.

I had high hopes for Edwards, I thought he played great in the tournament last year and I was secretly nursing a "Edwards will be like Hilton Armstrong and explode as a senior" fantasy. So far that is not happening. I am okay with that, but for UConn to be successful, Gavin's numbers need to improve. He averaged about 12 minutes a game last year and put up respectable numbers (3.8 ppg and three rebounds). His scoring has increased with his playing time (1o ppg) but he is only grabbing four rebounds. That will not be good enough if UConn wants to survive their trip to New York this week and it certainly will not be good enough one Big East play starts.

Again, it is easy to read too much into early games, and there has been a lot of good (Sticks! AHHHH!!!!) but if UConn is struggling this much on the boards and in the post against smaller cupcake-level teams it does not augur well for the future.