The view from South Bend

Share All sharing options for: The view from South Bend 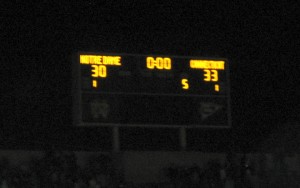 Meacham promised a better shot so here you go: The scoreboard at Notre Dame Stadium immediately after UConn's win.

Part of the odd reality of rooting for a very young program is that it is very easy for events to quickly become "the best/worst _____ ever." This is easy to understand, the emotion of recent events, when not counterbalanced by history, can lead to a lot of proclamations. However, just because the claims may sound grandiose does not mean they are not true. For instance, one can make a very compelling argument that three (or four) of the worst losses in UConn football's short history have come this year. I say this because I am convinced, without a doubt, that UConn's win over Notre Dame was the biggest win in football history. And I was there.

A rundown of the day is after the jump.

I cannot say enough about the game day experience in South Bend. As imperfect as the scheduling deal between UConn and Notre Dame may have been, the fact that UConn will not be playing there several times over the next decade is a real shame. The campus was a joy to walk around and it was as if ND staff were instructed to look for people wearing UConn gear and specifically welcome them -- it was a treat. 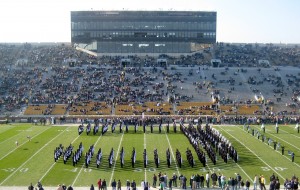 The UConn band, as you can see above, made the trip and did a fine job. I'm going to assume UConn sold its full 5,000 opponent ticket allotment as the UC fans were great, but having the band and cheerleaders there were a nice touch and helped add to the atmosphere.

As good as the UConn band was, the ND band was a sight to see. Really fantastic stuff. Notre Dame really does a fantastic job with pregame stuff, both bands marched for a bit and in a nice touch, the ND band played "UConn Husky" and had the UConn band director conduct them in the National Anthem (which included a flyover from two F-15s).

I am young, so I have never known Notre Dame to be "great," instead, I've been treated to over a decade of "what does Notre Dame need to do to return to prominence" talk. Still, there was something very, very special about being in that stadium. I cannot really quantify it except to say it was amazing to be a part of the "big time college football" experience. I enjoy games at the Rent, but there is something special about watching UConn play and then looking up to see this: 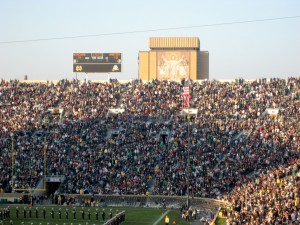 And none of that even gets to how great this game really was. Sure Notre Dame is no longer great, and yes, UConn did not play its best football, but that was still one hell of a game. Its hard to put the rollercoaster ride of emotion into perspective now. There was the jubilation when Todman ran back the kick, crushing deflation when Frazer was picked off in the end zone. There was joy as Dixon marched the ball down the field and elation when UConn tied the game. Watching two UConn TDs get called back on BS holding calls and Teggart hooking the field goal as time expired was painful, but seeing Dixon in the endzone at the end of the second OT made it all worth it.

I have loved Big Red's "U-C-O-N-N" cheer. Its the perfect cheer, simple, loud and effective. Plus, in my experience, it drives opposing fans absolutely insane. As the players celebrated on the field last night the 5,000 or so UConn fans in South Bend unleashed that cheer. It was not the loudest I have ever heard it, but it was perhaps the proudest. This team deserved this win and it was a joy to watch them get it. I have had the pleasure of being in the stands to see UConn win a lot of big games. This is not the best win I have ever seen -- you just cannot top seeing your team clinch a trip to the final four -- but it was close. This was UConn football's biggest win ever. The Huskies beat Notre Dame, which, down or not, is the team in college football, and they beat them in South Bend, and damn does it feel good.