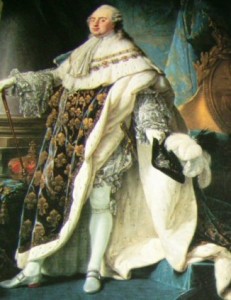 Louis XVI never understood how he found himself, hands bound, with his neck below the guillotine's blade.

The ill-fated King of France at the outbreak of the Revolution could not figure out why his people - the people who he genuinely felt affection for - had turned on him so ruthlessly.

Years earlier he sat on the throne of Europe's grandest state. All the world focused on King Louis, and the center of the world was his palace at Versailles. It was the home of pomp and pagentry, a site of architectural magnificence and a monument to the greatness of the Bourbon dynasty.

And yet there Louis lay, aware yet uncomprehending, his face staring into the cloth laid out in a wooden basket.

To the vast majority of Frenchmen, and especially the Parisians responsible for imprisoning the disgraced king, Versailles did represent the power of France. But it also represented the gluttony of the nobles, the abuse of the powerful and the greed of the privileged. Those relatively few nobles conspired to keep their power even as the people clamored for change. The nobles fought like dogs, but were overcome by a series of daring acts. Within months, the old order was toppled by revolutionary momentum.

And at the, er, head of it all was poor old Louis XVI. By the time he lay under the guillotine, his opulent way of life had long ceased. He was but a shadow of the magnificent man he once was. But the royal tradition dies hard. Not until that last blade fell on a cold morning in January 1793, could there truly be a new order in France.

Notre Dame Stadium is college football's Versailles, only without all the pretty mirrors. The history of the Fighting Irish is storied, their moments of pride nearly unmatched over the first 125 years of college football history. Everyone either loves or hates Notre Dame, but no one can take away what this midwestern Catholic school has meant to college football.

At the same time, Notre Dame is an anachronism representing an outdated, obsolete system which is meant to consolidate the power of the few at the power of the many. Notre Dame did not create the system, but it is the clearest representation of the need for revolution.

When college football polls reward style and flash over substance, Notre Dame's annual rise into the rankings (regardless of opponents beaten) should spring instantly to mind. When recruits are rated in part by which storied program is chasing after them, think about Notre Dame's perennial top-10 recruiting classes and mediocre results. When the postseason is determined nearly entirely by what matchup will draw more eyeballs rather than an a matchup between equals, Notre Dame (with its unequaled fan support and nine consecutive bowl losses prior to last season) is an obvious target.

Neither Notre Dame nor Louis XVI are evil. They have merely taken advantage of what they have, and have done what they must to keep alive their royal tradition. But the winds of change are upon us. Our goal, much like the peasants in 1789, must be to upset the old order - to knock the royalty off their perch.

Today, UConn gets its chance to contribute to the great revolution. With our Big East brethren looking on and the Fighting Irish wounded by recent failures, the Huskies have the chance to turn over Charlie Weis to the assembled mob.

A win Saturday would not be the climax blow that topples the old order, of course. But each member of the riffraff must do his own part.

Of course, the series history is slightly more interesting. First UConn and Notre Dame apparently agreed on a 10-game series with five games in South Bend and five games split between East Rutherford, N.J. and Foxborough, Mass. Then that number was knocked down to six. Now, it's unclear if any of the 10 games will ever be played.

This particular game was scheduled as a one-off and has no connection to the proposed series.

State of the Huskies: A bye week could not have come at a better time after three straight excruciating losses following the tragic death of Jasper Howard. Hopefully the rest and extra gameplanning time did UConn good.

Football Preview Week-ish Capsule: Here's what we thought you needed to know about the Irish back in August.

What's changed since then: The Irish still haven't beaten a ranked team since Week 2 of the 2006 season.

The offense has turned out to be pretty elite (with Jimmy Clausen occasionally being named as a darkhorse Heisman contender and the Golden Tate/Michael Floyd combo being utterly ridiculous).

The defense will be the reason that Charlie Weis is fired in two weeks. The Irish are ranked in the bottom half of I-A (against a relatively easy schedule) in a bunch of categories. For most of the season, the defense has been poor enough to let opponents get way ahead, forcing Clausen and co. to make weekly furious rallies. Sometimes it works (Michigan State, Purdue, Washington, Boston College), and sometimes it hasn't (USC, Pittsburgh, Navy).

Check out the game notes: UConn's are here, while Notre Dame’s are here.

The preview: As noted elsewhere on the blog, this will be the first time I root against Notre Dame for a football game. I do it with a clear conscience - alma mater comes first. But my fandom does give me the advantage of having watched most ND games this year with the critical eye of a cynical supporter.

Anyway, I have no idea how UConn will come out in this game. I have a feeling that after so many close calls and the emotional roller coaster of the last month, the Huskies will come out flat.

Unfortunately, Notre Dame has the offensive playmakers to bury UConn early if that's the case. As he showed last week against Pitt, Golden Tate is a touchdown waiting to happen. Michael Floyd is an athletic freak who will probably make one or two unbelievable plays that lead to Irish touchdowns.

The key to beating Notre Dame is simple in theory: contain, contain, contain. The Irish look like worldbeaters in between the 20's, but once inside the red zone, ND bogs down. Whether this is because of Weis' playcalling (expect to see a fade or seven in the end zone to Tate/Floyd) or some other reason, if UConn can avoid giving up 40-yard-plus touchdowns, they can hold ND to field goals and hang around. See: Navy 23, ND 21. (Making a couple key 3rd-down stops in/near the red zone was how UConn stayed in the Cincinnati game, too, and Cincy's offense is better.)

I'm fairly confident that UConn's suddenly-dangerous offense (the Huskies' pass offense, amazingly, is now in the top 40 in America) can execute against the ND defense. Apart from linebacker/maniacal tackling machine Manti Te'o and playmaking safety Kyle McCarthy, there's not a lot to be scared of on the Irish defense. Jordan Todman and Andre Dixon should be able to run the ball behind UConn's tough, smashmouth offensive line.

If Frazer can avoid turnovers (a risky proposition indeed) and do just enough to keep the Irish back seven honest, UConn's offense should churn up the yards and score enough to be in position to win the game.

In the end, I think Notre Dame is the slightly better team, and they have home field advantage. Hopefully UConn players haven't been reading the press about how this is the program's biggest game ever (which it is), because they cannot afford to let the game get away while playing in awe.

That being said, dear God, if there was any team that deserved a program-affirming win, it was this UConn football team. So I'm going to shed my usual cynicism, go out on a limb and say UConn takes it by making a big play in the final minutes. I literally cannot wait to see how my heart is ripped out tomorrow afternoon.