A few words on Notre Dame

Share All sharing options for: A few words on Notre Dame 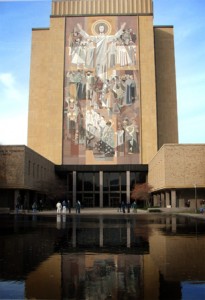 Football is not my thing, I enjoy it, I watch it and I root for UConn, but I simply do not feel that I know it well enough to preview it for an audience. Thankfully, I am sure Meacham will check in to fulfill that duty sometime soon.

However, pride, loyalty and school spirit are my thing. I was born and raised a UConn fan and I have never made a secret of that fact. Thanks to the fact that I attended a Catholic high school in the middle of the country (and now teach at one) I have encountered more than my fair share of Notre Dame fans. Some of them have had legitimate connections to the university, many have not, but they all share the same attitude. Win or lose, to them Notre Dame deserves its own special place at the head of the college football table.

All too often that attitude meant that my passion for all things Husky was laughed off or dismissed. Even in years when UConn has clearly fielded a better team than the Irish I was laughed off. I've heard it all and been asked "does UConn even have a football team?" more times than I care to remember.

Now I am happy to acknowledge that Notre Dame has an impressive football pedigree and that UConn does not. They've been playing big time football for more than a century, the Huskies have been playing it for less than a decade, I get it. This may not be the biggest game UConn has ever played, but Notre Dame is unquestionably the biggest opponent UConn has ever played.

I'll be in South Bend to watch the Huskies tomorrow, and I could not be more excited. After hearing over and over again that UConn would never be good enough to take the field against the Irish I will finally have the chance to see my team prove the doubters wrong, and the fact that UConn has a chance to put the final humiliating nail in Charlie Weis' coffin makes it all the more enticing.