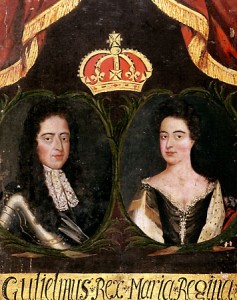 You read the season preview, right? Well, read that first.

Tonight, we release the hounds on the royal couple behind England's Glorious Revolution (6th-grade history FTW). All indications are that we will be opening this mother in style.

Anything else I could add about UConn would just be repetitive. So I'll just wish you all a Merry Basketballmas and get on getting on with the preview of tonight's season opener.

The media: TV: If you're in Connecticut, WTNH (channel 8 ) is televising the game. Elsewhere, you can catch it on SNY (and I would guess ESPN360 is carrying it, too). Or if you're in the Delmarva area, the game is also on MASN.

The Vegas favorite: UConn, minus-24

State of the Huskies: Optimism! UConn remains undefeated and, while we don't have a damn clue how good they really are, we get to start the discovery process tonight.

As an aside, the records resetting back to 0-0 gives me a chance to bring back one of my personal favorite tags.

So, tell me a little bit about the Tribe: A couple years back, William & Mary nearly made the NCAA Tournament as a big underdog. They reached the Colonial Athletic Association tournament final in a season in which they won just 17 games. Last year was a step back for coach Tony Shaver, as the Tribe fell back to 10-20 (5-13 CAA, 10th place).

They return four starters from that team, but they were picked to finish 10th in the 12-team league by the CAA coaches and media. The Blue Ribbon season preview has W&M 11th.

Sadly, W&M are one of the 32 Division I programs to never achieve a berth in the NCAA Tournament. You'd think William & Mary would have an advantage, given that two-on-one advantage. (I'm sure that joke is made all the time down there. And besides, Mary was never much of a rebounder. )

Check out the game notes: UConn's are here, while William & Mary’s are here.

Speaking of the Courant, they've rolled out their annual season preview section, which you can reach here. Good features on Jeromeba (if you've got a better portmanteau for the Dyson/Walker backcourt, I'm all ears), if you're interested.

Speaking of TheUConnBlog's resident mancrush, Neill Ostrout's feature reveals that Walker's team won a game over a team led by UConn alum Denham Brown in practice this week. And since Denham Brown scored 111 points once (can't believe that never got mentioned when Brown was here), that means Kemba will score at least 112 points in a game this year.

The kids up in Storrs have their special section out today, and if it's anything like the last four years, they're probably just waking up now (about 3:00 on Friday) after working until 6:30 in the morning. The DC's game preview is here.

And finally, from the opponents' POV, the William & Mary student paper (the exquisitely-named "Flat Hat") has a season preview for the Tribe, and we're all about perspectives.

The preview: The good thing about these early cupcake games is that there's very little pressure. For a school like UConn that is perennially excellent, opening night is a good chance for fans to get to know the new cast of characters, to be reacquainted with old favorites, and to see what changes in philosophy and playing style (if any) have occurred over the summer break.

To any BCS team playing a competitive first game, you don't know what you're missing by scheduling a feel-good, romp-worthy opponent.

Tonight is not a night for snapping to judgment, only a night to bask in the warming glow of the Gampel Pavilion lights, as we watch the next generation of UConn stars light up some hapless opponent. (I mean, unless UConn somehow loses, in which case, our instant reaction will just be a post that says "FIRE EVERYONE.")

As I said in the season preview, there's a lot of uncertainty as to how good this team will be. Tonight, with most everyone getting their first real look at half of this team, we begin to figure it out.

As for actual analysis, besides "UConn is awesome":

William & Mary was one of the slowest-playing teams in the country last year (just 63.8 possessions per 40 minutes, 304th in America). Usually, teams like that compensate by being super-efficient, but not the Tribe: they were terrible at shooting last year. Schneider and Sumner, who shot the most 3's by far last year, made 29 and 32 percent, respectively, from beyond the arc. McDowell shot a respectable 38 percent, but only took 68 shots.

Without much of a long-distance threat to contend with, UConn will be able to concentrate on figuring out how to play interior defense without the immense size advantage we've grown accustomed to.

Hopefully, the offense will take care of itself, the guards come out as hot as they did against UMass-Lowell, and the game is in hand by the 7:00 mark of the first half.

Season-openers are always a little sluggish, though, and William & Mary plays a decent matchup zone (according to last year's numbers), so I would not be surprised to see UConn struggle to get the knockout punch until early in the second half. So we'll just hope for solid efforts up and down the roster, and that should be more than enough to cruise tonight.

Either way, thank God basketball season is back. Let's go Huskies.
The prediction: