TheRoundUp: Pictures of an exhibition

Share All sharing options for: TheRoundUp: Pictures of an exhibition 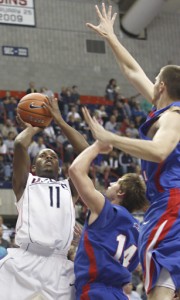 This football bye week could not have come at a better time, because we get to spend every waking moment considering why the NCAA chose to investigate Jerome Dyson and Donnell Beverley last week rather than, you know, when they weren’t playing games this summer.

Anyway, this week’s RoundUp will wrap up the exhibition season for the men and women, as well a bunch of other things that I found worth reading this week.

Until then, enjoy these handy links, kicked off by our…

So…anyone else freak out when they heard that three players were sitting out for non-injury reasons? Yeah, me too. And since Ater Majok (ineligible until December) and Jon Mandeldove (very much eligible…ladies) were also unavailable, it meant the Huskies had just seven players to play against Coach Cal’s alma mater.

Luckily, that situation didn’t last long. Dyson and Donnell Beverley played in the second exhibition game Sunday, and Jamal Coombs-McDaniel was cleared to play Tuesday afternoon. The Huskies should be at full strength (minus Majok and the Dove) Friday night.

Here’s something I don’t ever want to picture in my mind: Jerome Dyson ripped his toenail off after he stubbed it in a door prior to Sunday’s 88-50 exhibition win over UMass-Lowell. Dyson then scored 32 points, so apparently his replacement toenail also contains plutonium (have I told you my theory about how plutonium makes you shoot better?).

In this piece, the DC’s Kevin Vellturo argues that Providence is actually UConn’s No. 1 rival. But this can only be true if, in fact, Providence had ever been good at anything, ever. Or if Rhode Island were actually a state, rather than a fictitious land dreamed up by Bostonians to scare their children. Trust me, I've been there, and it was all entirely a figment of my imagination.

The Friars do manage to capture our collective disdain, but it is tempered by a healthy dose of apathy. We love beating Syracuse because – as long as they are not playing a powerhouse like the fine representatives of LeMoyne University – they are generally worthy (if evil) adversaries. We feel obligated to beat Providence because if we don’t, it indicates a fundamental character flaw in our teams: namely, the hubris of taking lightly a so-obviously-inferior opponent.

So to sum up, Providence is not No. 1 at anything, and certainly not UConn’s top rival.

It’s been far too long since we talked about Brandon Knight, the all-universe high school point guard who still has UConn on his list. So here’s a pretty nice feature about him being very competitive. Also, I feel like that headline needs a ‘z’ or two, to show how extreme and hip ESPN is.

Interesting, if obvious, piece by the WSJ, notable more for the chart at the bottom: look at the distance between #1 UConn and #2 North Carolina.

Ah, I already miss the "let your man drive past you and let him get swatted by Thabeet" era.

Lists are always good for easy, mindless entertainment. Can’t quibble too much with the first list – maybe I’d add the 2006 Sweet 16 game against Washington and, for all the pain it caused, the 2006 Elite Eight game against [nobody in particular] had a hell of a lot of drama.

The second list…I don’t know. The Syracuse loss wasn’t nearly crushing enough to deserve inclusion. I’d put the San Diego loss from 2008 on there, among others.

It’s almost disgusting how much talent Geno has. Maya Moore and Tina Charles are the two best players in America. Tiff Hayes and Caroline Doty are among the best sophomores in America. Faris could be a Freshman All-American. Lorin Dixon and Kaili McLaren could start for most teams in America.

I mean, I’m not going to complain. I like championship banners.

There are better, more versatile players on UConn’s bench than the speedy Dixon, but likely fill-ins Caroline Doty and Tiffany Hayes are not true point guards. It’s not going to be too big a deal until the schedule gets moderately tough, but it would not surprise me to see the Huskies struggle a little bit to match last season’s dominance (while still remaining ridiculously dominant).

And now, the female counterpart to Mike Anthony’s above list, as done by John Altavilla.

I for one was surprised there were even 10 losses to choose from, but then I guess there have been at least 10 seasons in which the Huskies did not win a national title. The Stanford 2008 Final Four loss (yours truly back in my Daily Campus salad days) probably deserves a mention.

And choosing 10 great moments is easy when six of them are national title victories.

Quiet week for the football beat writers, as they will be spending the next four or five days trying to reach Charlie Weis’ lair, avoiding traps along the way to find a way to speak with the soon-to-be-fired coach.

Also, let me be the first to break this story before the rest of the Connecticut media and NBC do: Zach Frazer once played for Notre Dame. Now he starts for UConn. And UConn is playing Notre Dame next week! ISN’T THAT JUST DELIGHTFULLY IRONIC?!?!??!?!?!??

This will probably be old news by the time this is posted, which is why it’s going here. We had it on the Twitter Tuesday night, but it’s worth having here, too. With the release of the affidavit, we should be able to reconstruct more or less exactly what happened that fateful Saturday night outside the Student Union.

It sounds like the situation began as a result of a typical flare of college-male testosterone, only to escalate into something much more tragic thanks to the reckless, blatant and brutal disregard for life on the part of the defendants. That’s how I read into it, anyway.

In other Jasper Howard news, a "celebration of life" for the slain football player is being held Thursday night in the Jorgensen Auditorium on campus.

Silver’s roundup is about the extent of our on-field news this week.

Solid work all around.

And that’ll do it for TheRoundUp. Until next week (or whenever I get the inspiration)…