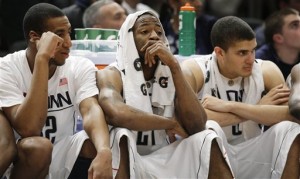 I refuse to post a picture of Syracuse celebrating.

This is a little late - Saturday is the sixth day until basketball season officially kicks off, and I'm posting this at 12:50 AM Sunday.

I was planning on skipping it, but I figure if we concentrate all the bad feelings in one night, UConn fans will feel OK in the morning.

Of course, UConn football came up just short against #4 Cincinnati tonight. And #6 in our countdown recalls another time in 2009 when UConn came up short:

The greatest game ever played.

"The only thing keeping me going as a UConn fan tonight is my blind faith that, indeed, fortune favors the good."

How naive I was.

But what else was there to believe in following a six-overtime game?

Our highly-entertaining liveblog of that game covered all the ebbs and flows. And the simplest way to describe the game is thusly:

Syracuse led most of the way, UConn fought back to get it to OT. UConn led almost entirely for five overtimes, except at the very end of the arbitrary five-minute time limit at the end of each period. Syracuse won the battle of attrition in the sixth overtime and cruised to a 10-point win.

But if you watched it, you know you saw something special. Stanley Robinson doing ridiculous things. Kemba Walker tying it late. Eric Devendorf making an ass of himself. Jonny Flynn carrying Jim Boeheim to yet another exhausting Big East tournament win prior to an NCAA flameout. And you felt the pain and fatigue on Flynn and Walker's face as they hobbled around, muscles sore and tiring, barely able to go at full speed even with 100% effort.

Watching the game was an emotionally draining exercise that the whole family could agonize over, whichever side you were on. It was a game worthy of its own book, film, lunchbox cover and DVD box set.

Of course, UConn lost, so maybe it's better to not remember it. Still, Cuse-UConn was the greatest single game in college basketball history and we recognize it as such. Although as Porter put it the day after, it'd be nice to one day experience some history on the winner's side.

Unlike Porter, though, I was not a UConn fan in 1999 or 2004, and my freshman year at UConn ended with a loss to George Mason. When UConn eventually reaches the top of the mountain again - or when they win one of the greatest games ever - a loss like this will make it taste so very, very sweet.

Until then, the editorial position of the blog remains "suck it Syracuse" - and may the Orange remain a wholly owned subsidiary of LeMoyne University.