Choose your own adventure! UConn @ #4 Cincinnati

Share All sharing options for: Choose your own adventure! UConn @ #4 Cincinnati 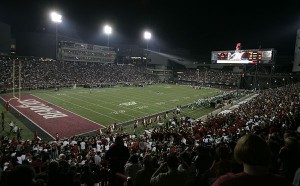 Nippert Stadium: a better name than Fifth Third Arena (5 out of every 3 people think that's a terrible name). But only marginally.

Tonight's nationally-televised showdown with Cincinnati figures to be UConn's best chance at letting people know they exist. Tons of college football fans probably haven't seen the 9-0 Bearcats and eyes will be on the "pretenders" to the SEC's throne ("pretenders" because they don't play games with 10 combined points at halftime every week).

I will say, it will be friggin weird to hear Brent Musberger Kirk Herbstreit talk about Florida instead of my team. This must be how Big 12 fans feel every week.

Anyway, after the Worst Loss Ever last week, you might be wondering where the Huskies go from here. No one knows for sure. But I've always said that football is a game of probabilities. And if you want to figure out the chances of what could go down tonight at Nippert Stadium, continue onward...

(Sorry, that's the second and final Goosebumps reference. But read on anyway.)

UConn is not as bad as their record would indicate. And while Cincinnati is the better team, the gap between the two does not appear (to me) to be that wide. I still have faith in UConn's defense despite the Post Pattern That Shall Never Be Spoken Of Again.

I don't have faith in much else after that Rutgers game, and I think that I'd be listed under "Famous Cynics" on Wikipedia if I knew someone who thought I was famous. But after four soul-crushing losses this year, perhaps a couple bounces finally break their way and SuperMonsterCrazyUpset Saturday (Iowa, Notre Dame(?), Alabama(?)) ends with yet another unbeaten team going down.

UConn keeps it close, figures out a way to contain Mardy Gilyard and Collaros/Pike (whichever one plays) for most of the game, and is in a position to win the game late.

However, on their final, potentially-game-winning drive, Zach Frazer's throw to Marcus Easley is caught inside the Cincinnati 10. Easley trips over his own feet at the 5. Three plays later Dave Teggart misses a 20-yard game-winning field goal as time runs out.

Collaros need to go 60 yards in 7 seconds with Cincinnati trailing by one point. In the shotgun, Collaros drops back, looks for a receiver, and hits Mardy Gilyard. Gilyard makes his way inside the 10 before he is stripped by Robert Vaughn.

Vaughn recovers at the 3-yard line, but runs backwards to try and avoid a tackle. He's dropped in the end zone for a safety. UConn loses by one point.

This wouldn't even be UConn's most excruciating loss this year.

Cincinnati grabs a big lead early after some big plays, and remains in control of the game despite failing to sustain any drive longer than six or seven plays.

Zach Frazer struggles to get in rhythm against a swarming defense playing from ahead. The Huskies don't exactly look outmatched, but they suffer some more bad luck with turnovers and a depressing inability to stop big plays on defense. Thus, they also don't look like much of a threat for a team with dreams of a BCS title game appearance. Bearcats win by two or three touchdowns.

Cincinnati scores on the opening kickoff, and 15 more times. The Bearcats win 112-17 and UConn disbands its football program as a result. All players transfer to schools that originally recruited them, giving the Ivy League its best talent infusion since 1950.

Anyway, as for my actual prediction?

Well, the 'wishful thinking' part of my brain is convinced that #1 is going to happen. UConn is so friggin' due it's unbelievable. The Huskies (FINALLY!) have balance in its offense and a solid run defense, which is enough to hang with most teams in the Big East.

On the other hand, the secondary is young and paper-thin, special teams are still atrocious and "balance" doesn't do a whole lot of good when you're playing from behind every week.

Zach Frazer still scares the hell out of me, Cincinnati is really, really good and UConn always struggles in that town (half the team injured in 2005, 27-3 loss in the glorious 2007 season). So I'm inclined to go with scenario #4.

Enjoy the game folks. Keep some adult beverages close for when you need them for happiness.