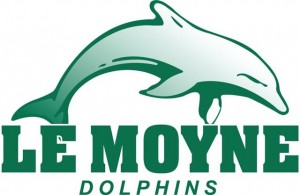 The second-annual Syracuse Hate Half-Week now has its official muse: this adorable dolphin you see above.

We would like to thank Le Moyne University for showing to the world tonight what we in Storrs knew long ago: Syracuse University is straight-up clown shoes. The Dolphins - located partly in the city of Syracuse - beat the Orange 82-79 in an exhibition game at the Carrier Dome.

But don't fret, Orange fans. While you will forever be referred to as Syracuse's second-best college basketball team (much like you have will forever have the second-best Jim coaching in the Big East), it could've been worse. Theoretically.

So keep those chins up and I'm certain you'll make it through that annual upstate New York non-conference gauntlet of Albany, St. Bonaventure, St. Francis Colgate and Cornell with one, two losses, tops. And soon enough, you'll be back in the NCAA Tournament serving as beatdown fodder for some plucky underdog 12 10 8 5 seed in the first round.

And to you, the Fighting Jesuit Dolphins of Le Moyne: we in UConn Country salute you. To show our gratitude for clowning the Orange, we will reference your school at least once in every post that mentions Syracuse for the rest of the season. We consider it our pleasure to advertise your fine institution.