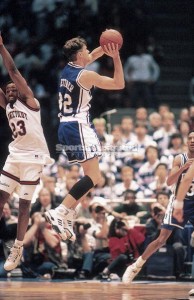 It is hard to remember now (thankfully), but for a long time UConn had the dubious honor of being "the best school never to reach a Final Four," so number nine on our countdown is the nine years between the dream season and UConn finally reaching the Final Four.

After Tate George was both late and great to propel UConn past Clemson, the No. 1 seeded Hukies were only 40 minutes away from the Final Four when they ran into Duke. When Christian Laettner unleashed his fateful shot and ended the Huskies dream season he denied Connecticut the best shot it would have at the Final Four for almost a decade. The Huskies had chances over the next nine years, but they never made it all the way.

In 1994, Donyell Marshall missed two key free throws allowing Florida to sneak by the Huskies in the Sweet 16. If UConn had won they would have faced a BC team that could never seem to find a way to beat UConn.

In 1995 the Huskies ran into a buzzsaw when they met up with eventual national champ UCLA.

In 1996 Mississippi State ruined Ray Allen's last year by upsetting the Huskies in the Sweet 16.

In 1998, fresh off a buzzer beater win over Washington, the Huskies had an Elite 8 matchup with North Carolina, in North Carolina. Needless to say, they did not win.

Finally, in 1999, UConn broke the streat, beating Gonzaga and allowing the "most wins without a Final Four" crown to go to a far more deserving school: Boston College.

In other news, UConn basketball tips off tonight against AIC. Thank god.