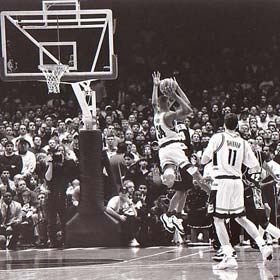 We here at TheUConnBlog deliver on our promises, so when advertise a recurring feature as inconsistent, we do our best to make it happen. In case you were wondering, 14 was the amount of 30-win season for the women's team, 13 was Chris Smith and the total number of Huskies in the NBA and 12 was A. J. Price. But hey, I'm not here to talk about the past, so moving right on we'll get to number 11, which stands for the 11 point deficit UConn erased to take the 1996 Big East Tournament title. That run was capped of by Ray Allen, who hit a circus shot to give UConn the 1996 Big East Tournament Championship. UConn surged back from a 74-63 hole with 4:00 remaining and then Ray worked his magic.

There is no good video of just the shot, so the above highlight reel will have to do (skip ahead to the 7:30 mark). To sum up, Allen, arguably the greatest UConn player of all time, launched an absurdly off balance shot from the elbow as time was running out in the 1996 BET final against Allen Iverson and the Hoyas. The shot fell, giving UConn a 76-75 lead and when Georgetown failed to convert on the other end, UConn took home the title.

So now we're down to 11 in the countdown. Basketball season is less than two weeks away, and with the way the football team is playing, it cannot come fast enough.