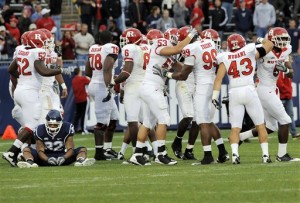 I have long contended that UConn's 2003 loss to NC State (Danny-O threw a pick-six with under a minute left as UConn was driving to win a tie game) was UConn football's worst ever loss. No longer. The combination of opponent, bowl implications and the way the game ended make it bad enough. The fact that the team has to go through yet another brutal loss after the murder of their teammate makes it even worse.

I am sure Meacham will be on soon enough to share his thoughts on the game and break down the actual football action, but for now it's enough to say that this one hurts.