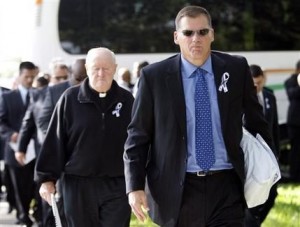 The second week after the murder of Jasper Howard has been a time of remembrance and trying to move on. The team tried to do both Monday in Miami, when they attended Jazz's funeral. The team, along with 3,000 other mourners (and more watching on the live internet stream), got a chance to say goodbye in a poignant ceremony.

Today is also, I believe, the first day since last Sunday in which the UConnHuskies.com homepage is not an "RIP Jasper Howard" screen, a sign that life will continue to move forward.

Below the jump, updates on how you can help the Howard family, the arraignment of his alleged killer, and more.

Obviously, the biggest story today is the arraignment of both the man accused of stabbing Howard and an alleged accomplice.

Some more links regarding Jasper: