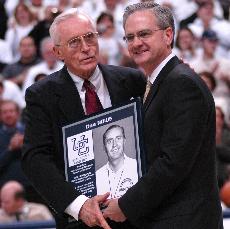 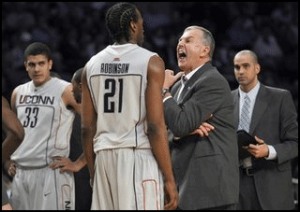 College basketball players have to leave their mark on their school in a one-to-four year period. So while every big-time program has its litany of star athletes, each of them is defined by the men in charge, standing on the sideline barking instructions, sometimes for decades on end. UCLA had Wooden, UNC had Smith, Syracuse has Julie Boeheim's husband.

Jim Calhoun, of course, is our patron saint of basketball and just about the baddest mothaf---er to ever live. And while we could wax poetic on the man who crushes cancer, Connecticut muckrakers and clown colleges with that distinctive tough-Irish-bastard-snarl, I'd like to use this, the 18th day before the games start, to honor the (technically) 18 coaches in UConn men's basketball history:

It started back in the early days of the 20th century, when the famous "No Coach" led the Huskies for 14 years. I tend to believe that UConn is covering up the fact that their first head basketball coach was a dog or farm animal with a heart of gold, perhaps not unlike Air Bud.

From there, a parade of vaguely familiar names (Guyer, whose name is now attached to the student recreational gym; Christian, whose name adorns UConn's baseball stadium) take us through the program's anonymous early history and up to...

Under Greer, UConn became something of a northeastern power. It was Greer who coached the Huskies to the cataclysmic victory over a dominant Holy Cross team in 1954, and UConn won 72% of its games and made seven NCAA tournaments during his reign (1947-63).

Following Greer's untimely death in 1963, Shabel took over with a couple of the best pre-Calhoun teams in school history, including the Elite Eight squad from 1964.

Finally, we edge up near the modern era with two very familiar names. Dee Rowe, of the frustratingly effective "hold the ball against Rhode Island because all our players are injured" strategy, kept UConn competitive for nearly a decade. He's been involved with UConn athletics for 60 years, earning all kinds of respect, and he retains some sort of honorary executive position with the men's basketball program to this day (sort of like Lou Carnasecca at St. John's.)

Dom Perno oversaw UConn's entry into the Big East and was apparently none too popular among the Connecticut basketball faithful at the time, if I'm reading my copy of Hoop Tales correctly. With the drastic step-up in competition in the early 1980's, UConn needed a program-builder. And in the year before my birth, they found one of the four greatest men in American history (along with Washington, Lincoln and the first guy to put buffalo sauce on boneless chicken wings) to lead them.

While we may not know much, if anything, about the majority of the other 17 gentlemen in this exclusive club, we must honor them for laying the foundation for Coach Cal to rock this and all other worlds.